The Tattersall's Cup is a Group 3 race run over 2400m for end-of-winter stayers and takes place in Brisbane at the end of June on Tattersall's Tiara Day as a potential Caulfield Cup lead-up. 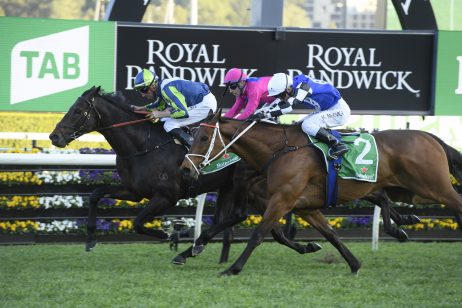 The Tattersall’s Cup is traditionally held at Eagle Farm Racecourse on Tattersall’s Tiara Day in late June, the final major day of racing in the Queensland Winter Racing Carnival.

The event presents trainers with a great opportunity to give their stayers a final test before the winter break. Paying $200,000 in prize money, the Tattersall’s Cup was previously run under quality handicap conditions before changing to set weights plus penalties in 2020.

The Tattersall’s Cup attracts horses still in form after their winter campaign, looking for a final black type victory. Open to horses three years old and above, the Tattersall’s Cup field may feature graduates that contested the Group 2 Brisbane Cup earlier in the month or three-year-olds backing up out of the Group 1 Queensland Derby (2400m).

In 2019 Vow And Declare improved on a second in the Queensland Derby before winning the Tattersall’s Cup (over 3000m). He would go on to have an outstanding spring campaign running second in the Group 1 Caulfield Cup and winning the iconic Group 1 Melbourne Cup.

The Tattersall’s Cup traditionally shares the race card with the Group 1 Tattersall’s Tiara (1400m), a $600,000 weight-for-age sprint contest that attracts some of the more talented fillies and mares around.

Note: Due to COVID-19 the 2020 Tattersall’s Cup ran on the same card as the Group 2 The Roses and the Group 2 Dane Ripper Stakes.

The Tattersall’s Cup 2021 ran on Saturday June 26, 2021 and was won by an historic 12 lengths by the odds-on favourite Incentivise.

The Peter Moody-bound Incentivise ($1.40) made history with a runaway 12-length victory over Group 1 winner Mirage Dancer ($8) in the 2021 Tattersall’s Cup results. The rising five-year-old is now the all-in favourite to win the Caulfield Cup and Melbourne Cup spring features.

Click here to read more on the huge 2021 Tatt’s Cup win by the Spring Cups-bound Incentivise.

The winter’s top Tattersall’s Cup 2021 betting markets and links to the Brisbane racing odds online at Ladbrokes.com.au are available below upon release.

Vow And Declare ($3 in 2019) followed by 12-length champion Incentivise ($1.40 in 2021) are the latest favourites in Tattersall’s Cup betting to salute for the punters.

The Tattersall’s Cup field attracts a smart line-up of both local Queensland stayers and interstate visitors usually coming off a Brisbane Winter Racing Carnival campaign. Many gallopers out of the Tattersall’s Cup head to the Sunshine Coast next-up for a shot at the Listed Caloundra Cup (2400m) the following month.

The official Tattersall’s Cup 2021 Final Field & Barriers will be released the Wednesday of race week and provided for the punters below.

Racing Queensland are set to release the early 2021 Tattersall’s Cup Nominations on the Monday leading-up to the race and the entries will be available in full below.

The Tattersall’s Cup 2021 nominations are now out with the Steve Tregea-trained Incentivise odds-on on early betting to make it six straight wins, although the gun four-year-old is a doubtful final acceptor.

The Tattersall’s Cup was inaugurated in 1924 as a Principal Race, and granted Group 3 status in 1980. Serelot won the first edition of the race, also taking out the Queensland Derby in the same year.

In 2020 the Tattersall’s Cup ran as a set weights plus penalties event over 2400m due to the impact of COVID-19 on the Brisbane Winter Racing Carnival. Trainer Chris Waller dominated the race with Brimham Rocks leading an all-Waller first four.