Run by the Victorian Racing Club, Flemington Racecourse in Melbourne is one the most well-known racecourses in Australia and is home to a number of high quality horse races including the Melbourne Cup, Victoria Derby, Newmarket Handicap and Australian Cup. 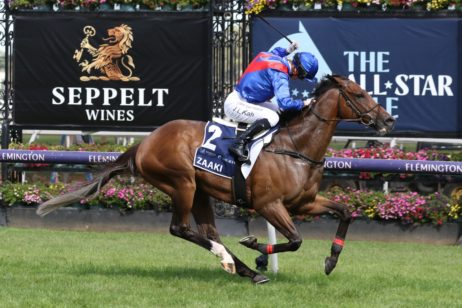 The All-Star Mile 2022 Results: Zaaki Salutes for Punters From Outside Barrier

The Flemington Racecourse is the most popular and oldest metropolitan horse racing track in Australia and the setting for the prestigious Melbourne Cup every first Tuesday of November. The course is located on low alluvial flats with the Maribyrnong River next to it. The low lying field is complemented by the hill surrounding the racetrack so that spectators can get a good view of the race.

The Flemington Racecourse represents the strong Melbournian and Australian heritage. The first race meeting held in Flemington was on the rough river flats near the Maribyrnong River in 1840. In 2006, Flemington Racecourse was listed on the National Heritage List as a centre for traditional and cultural celebration and being one of the few sport venues that displays the passion of a nation.

Flemington Racecourse - horses jump from the barriers in front of the Melbourne city skyline.

The Spring Carnival is one of the few events in the world that captures the attention of the most uninterested fans of the sport. Low-stake casual gambling for carnival races is available all over the nation like random lotteries and straight wagers.

The Flemington carnival starts with the Victoria Derby on the Saturday before the Melbourne Cup. This race is a set-weight competition for three-year-old horses and serves as the preview for horses competing in the Melbourne Cup four days after.

The Melbourne Cup on the first Tuesday following the Victoria Derby. This day of is a public holiday in Melbourne and watched by millions of fans and punters in Australia and around the world. Other races held during the Flemington Spring Carnival include Victoria Racing Club Oaks held on the Thursday immediately after the Melbourne Cup, and the Victoria Racing Club Stakes held every Saturday after the Oaks. The Oaks is traditionally called the “ladies’ day” while the Stakes is called as the “family day”.

Aside from hosting the most exciting horse racing events in Australia, Flemington is also known for its streams of beautiful roses which lined up in a mounting enclosure around the track. These roses are in full bloom in time for the Spring race carnivals serving as a nice backdrop for the winning post. The Flemington Racecourse is also known for the “straight six” – a stretch of the track that runs a straight 1200 metres joining the course proper.

There are many venues within Flemington that guests can look forward to during the Melbourne Cup Carnival. Some of the best venues include the Chairman’s Club, the Gallery, Hill Stand Corporate Suites, Panorama Restaurant, the Peak, and Saintly Place Restaurant. Most of these venues offer a direct angle to the whole racecourse while providing the luxuries and amenities for VIPs.

The Melbourne Cup racecourse attracts new and old punters from around the globe with the high profile races happening here. You can find the latest odds and lines, as well as the best betting options for the Melbourne Cup from top horse racing websites. Once you register, you can view the latest news and make your finals bets before the start of the race.

Here are your transport options if you want to know how to get to Flemington Racecourse:

Flemington Racecourse is located at 400 Epsom Rd in Flemington, about 5kms north west of the Melbourne CBD. It should only take you 15 minutes to get there. There is limited parking at the venue, and parking costs apply. It is suggested that visitors seek public transport options on big race days. Travelling to Flemington Racecourse via car can be difficult too, as traffic will be extremely busy around the racecourse.