The Missile Stakes is a Group 2 sprinting event held at Rosehill Gardens Racecourse (Randwick in 2021 due to COVID) in August as a lead-up to the $15 million The Everest held in October. 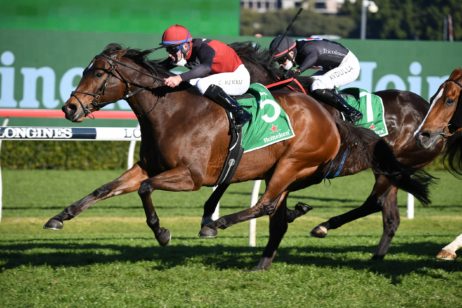 *Note: The 2021 Missile Stakes Day program moved to Royal Randwick due to COVID.

Contested under weight-for-age conditions, the Missile Stakes field usually attracts a decent selection of sprinters looking to kick their spring racing campaign off with some black-type success. Many horses run first-up in the Missile Stakes and could move towards a tougher run south during the Melbourne Spring Racing Carnival.

In 2016 Rebel Dane ran second in the Missile Stakes and went on to win that October’s Group 1 Ladbrokes Manikato Stakes (1200m) at Moonee Valley on Cox Plate Eve. The 2016 Missile Stakes winner Tycoon Tara also went on to win a Group 1 the following year taking out Brisbane’s Tatt’s Tiara in 2017.

The Missile Stakes form was further franked in 2018 with the winner Pierata going on to win the 2019 All Aged Stakes after a number of other Group 1 placings.

The 2020 Missile Stakes champion Eduardo continued on to secure Group 1 wins in the 2021 The Galaxy and Doomben 10,000 the following year.

The event now serves as a possible early spring lead-up for horses chasing a slot in the coveted $15 million The Everest field at Randwick in October.

The Missile Stakes 2021 ran on Saturday August 7, 2021 at Royal Randwick (moved from Rosehill) and was won by Phobetor.

The Michael Costa-trained Ramornie Handicap runner-up Phobetor ($5.50) was ridden to perfection by Tommy Berry to settle third the fence before taking a narrow split on the straight to beat July Sprint winner Chat ($13) and beaten favourite Fasika ($3.20) home in the 2021 Missile Stakes trifecta.

Click here to read more on the strong win by Phobetor in the Missile Stakes 2021 results.

The season’s latest Missile Stakes 2021 betting odds and market links to Ladbrokes.com.au will be available below the week of the race.

In 2014 Sweet Idea won the Missile Stakes before finishing second next-up in the Memsie Stakes in Melbourne. She also placed fourth in that year’s Group 1 Sir Rupert Clarke Stakes (1400m), won the Group 2 Tristarc Stakes (1400m) and ran second in the Group 1 Myer Classic (1600m) at Flemington during the Melbourne Cup Carnival.

The official Missile Stakes 2021 Final Field & Barriers will be released and published in full below on the Wednesday of race week.

Chris Waller’s returning All Aged Stakes winner Kolding heads a small 2021 Missile Stakes field at Randwick this weekend that is down to just seven runners following the early withdrawal of Hellenism.

The early Missile Stakes 2021 Nominations are announced by Racing NSW on the Monday leading-up to the race and will be available below as soon as released.

The Missile Stakes was inaugurated in 1978 as a Principal Race, prior to being reclassified as a Group 3 event in 1980. For the 2014 edition, the race was upgraded to Group 2. The Missile Stakes has been held at a few different venues over time, with Rosehill playing host until 2011, then Warwick Farm stepping in for 2012, before Randwick from 2013 – 2018.

The 2019 edition of the Missile Stakes saw the event move back to Rosehill Gardens Racecourse, while in 2021 the event will take place at Randwick due to COVID-19.

The Missile Stakes was initially raced over 1100m. In 2010, the race began to be raced over 1200m and has remained at that distance since. The Missile Stakes forms a popular double with the Premiere Stakes at Rosehill, which German Chocolate (2007) and Spark of Life (2004) have both managed to achieve.