The JRA Cup is a Group 3 event held at Moonee Valley under the lights on Moir Stakes Night as a possible lead-up to the Ladbrokes Cox Plate. 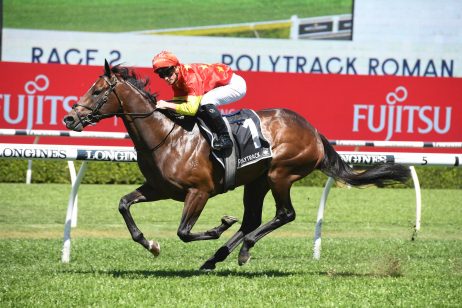 The JRA Cup is a Group 3 staying event held at Moonee Valley racecourse during the annual Melbourne Spring Racing Carnival.

Held towards the end of September or early October, the JRA Cup attracts stayers and milers looking to step up in distance. Run over 2040m, it is held over the same track and distance as the coveted Group 1 Ladbrokes Cox Plate (2040m) run a month later.

As an open quality event, the JRA Cup attracts some standout performers and offers $200,000 in total prize money.

Those horses which contest the JRA Cup often come via an eclectic mixture of preparations. One of the more common lead up races to the JRA Cup is the Group 3 Naturalism Stakes (2000m) held at Caulfield a week before. Horses that experience success sometimes go on to major feature races, such as the Group 1 Caulfield Cup (2400m) or the Group 2 Moonee Valley Cup (2500m). The 2018 JRA Cup winner The Taj Mahal went on to win that spring’s Group 2 Zipping Classic.

A big late run by Sizzling six-year-old Secret Blaze ($5.50) in the JRA Cup 2021 results has seen the galloper take the next step towards a potential $5 million Caulfield Cup run this spring.

The latest Ladbrokes JRA Cup 2021 betting odds provided by Ladbrokes.com.au are listed below complete with links  to the markets for you to lock in your JRA Cup tips.

The JRA Cup Field attracts a strong line-up of staying types each spring and is a possible target for gallopers stepping down in class of a run in something like the Group 1 Makybe Diva Stakes (1600m) at Flemington a fortnight earlier, a race the 2017 JRA Cup winner Jon Snow improved on a lead-up eighth in to win.

The JRA Cup 2021 Final Field & Barrier Draw will be released by Racing Victoria on the Wednesday leading-up to race night and will be published in full below.

The official JRA Cup 2021 nominations close on the Monday of race week.

Inaugurated in 1996, the JRA Cup has a relatively short history in comparison to major races across Australia. However, it’s above-grade prize money, usually more-than-impressive field and interim distance have combined to ensure the JRA Cup has experienced rapid growth in prestige and popularity since its inception.