The Coongy Cup is a Group 3 staying race held at Caulfield Racecourse in October on the Wednesday leading-up to the $5 million Caulfield Cup. 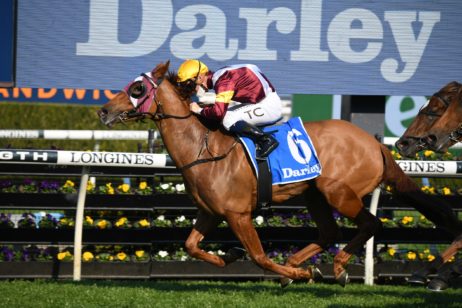 The Coongy Cup (formerly known as the David Jones Cup) is a 2000m staying event held at Caulfield Racecourse in Melbourne on the Wednesday prior to the iconic Group 1 Caulfield Cup (2400m).

An open handicap, the Group 3 Coongy Cup pays $200,000 in total prize money and now offers a Caulfield Cup ballot exemption to the winner should they be among the latest round of acceptors for the $5 million feature.

It is one of three Group 3 races taking place on the Caulfield Cup lead-up meeting along with the Blue Sapphire Stakes and Ladies’ Day Vase with the day’s action now headlined by the Group 1 Thousand Guineas (1600m).

Many of the horses who target the Coongy Cup will go on to run in events such as the Group 2 Lexus Hotham handicap (2500m) or the Group 2 Moonee Valley Cup (2500m).

The most notable Coongy Cup form in recent years was Shocking (2nd in 2009) who went on to do the Lexus Stakes – Melbourne Cup double during that spring’s Melbourne Cup Carnival.

More recently in 2018 Best Of Days ran a dead heat for first with Mask Of Time in the Coongy Cup before winning the Group 1 Cantala Stakes next start.

Edward Cummings’ Queensland Oaks winner from the winter Duais ($11) was back in winning form with a narrow victory in the 2021 Coongy Cup results ahead of a likely back-up into the Group 1 Caulfield Cup just three days later.

The latest Coongy Cup 2021 betting odds will be listed below with fixed win Coongy Cup odds provided by Ladbrokes.com.au complete with links so you can back your Coongy Cup tips at the right price this Caulfield Cup Carnival.

The Coongy Cup field attracts stayers from a range of preparations, including some eyeing the Caulfield Cup ballot exemption on offer to the winner for that Saturday’s Group 1 classic. A number of Victorian horses run in the Coongy Cup field, and often you’ll see some foreign raiders getting some staying preparation in leading up to bigger events.

Horses may back-up out of the Coongy Cup field and chase glory in the iconic Group 1 Melbourne Cup (3200m) over the two miles at Flemington on the first Tuesday of November, a race Shocking won after an earlier Coongy Cup second in 2009.

The official Coongy Cup 2021 Field & Barriers are announced on the Monday of race week and will be published in full below once released.

Nominations for the Coongy Cup in 2021 close the Thursday prior to the race and will be published below once announced.

Established in 1898, the Coongy Cup boasts well over a century of classy racing. Between its inauguration and 2007, the Coongy Cup was known as the David Jones Cup until a recent sponsorship change. It is still registered under that name.

Up until 1997, the Coongy Cup ran on the second day of the Caulfield Cup Carnival. It has almost always been held at Caulfield Racecourse. However, during the second World War it was held at Flemington Racecourse. In 1997 and 1998 it was briefly held at Sandown Racecourse on a Sunday.

A Principal race until 1978, it received Group 3 status immediately. The distance of the Coongy Cup has changed multiple times throughout the years. This is illustrated in the table below. Keep in mind that all values given prior to 1973 are approximates, as race distances were then measured in furlongs and miles rather than metres. The Coongy Cup changed dates in recent years having previously been held on Caulfield Cup Day, now taking place three days earlier and offering the winner a Caulfield Cup ballot exemption.

There have only been three dead heats in the race history. In 1940, Lanarus and Morvren crossed the line together, and in 1954 the same happened with Sunish and Te Totara. More recently, Best Of Days and Mask Of Time were declared dead heat winners in 2018. In 2009, Baughurst became the first horse to win the race two years in succession (2008, 2009).