The PB Lawrence Stakes is a Group 2 event held at Caulfield Racecourse in August. 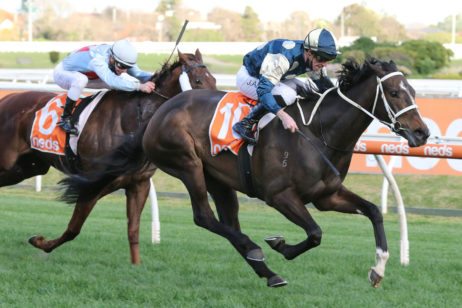 The PB Lawrence Stakes is the first Group 2 race during the Melbourne Spring Racing Carnival. Held at Caulfield Racecourse in mid-August, the 1400m event is held on the same day as the Group 3 Vain Stakes (1100m) for colts and geldings and the Group 3 Quezette Stakes (1100m) for the fillies. Worth $300,000 in prize money as of 2021, the weight-for-age race is open to all horses aged three years and over.

Formerly known as the JJ Liston Stakes, the race name was changed to the P.B. Lawrence Stakes in 2010.

The PB Lawrence Stakes is a nice lead up race to the Group 1 Memsie Stakes (1400m) held a fortnight later at Caulfield, which marks the start of elite level racing for the new season in Melbourne. The only horse to manage the P.B. Lawrence Stakes/Memsie Stakes double in the past 30 years is Regal Roller (2004).

The PB Lawrence Stakes generally attracts an above average group of gallopers many eyeing a tougher run in something like October’s Group 1 W.S. Cox Plate (2040m) at Moonee Valley later in the season.

The Trent Busuttin & Natalie Young-trained mare Sierra Sue ($8) was excellent coming down the outside three-wide no cover to run over the top of her rivals and take out the PB Lawrence Stakes 2021 results ahead of the Group 1 Memsie Stakes later in the month.

Betting market links to Ladbrokes.com.au offering the top PB Lawrence Stakes 2021 odds this Melbourne Spring Racing Carnival will be provided for punters below the week of the race.

Savatiano ($5 in 2020) was the last favourite in the PB Lawrence Stakes odds to salute for the punters, following on from the 2019 win by fellow mare Mystic Journey who also jumped the punters’ pick.

The official PB Lawrence Stakes 2021 field and barriers featuring a host of Group 1 bound gallopers will be announced by Racing Victoria the Wednesday leading-up to the race and detailed below.

Click here to read more on the key horses in the 2021 P.B. Lawrence Stakes field and betting market.

PB Lawrence Stakes 2021 nominations close the Monday of race week with the full list of early entries to be published here once announced.

The autumn’s Group 1 C.F. Orr Stakes winner Streets Of Avalon is all-in favourite of the 10 gallopers making up the early 2021 P.B. Lawrence Stakes nominations for the feature race at Caulfield this weekend.

First won by One Up in 1949, the JJ Liston Stakes was a 10 furlong race until 1968 when it became a 7 furlong race until 1972. After it became a 1400m race, it was quickly elevated to Group Two status. Since its inauguration, Tauto has been the only horse to successfully win two races in 1971 and 1972. The 2007 winner Apache Cat ran a successful campaign after his PB Lawrence Stakes win as he ran second in the Makybe Diva Stakes and then won several Group 1 races. Apache Cat also holds the race’s fastest winning time record with 1 minute 22.1 seconds.

In 2019 the PB Lawrence Stakes was won by classy filly Mystic Journey who won the inaugural $5 million The All-Star Mile at Flemington off the back of her Group 1 Australian Guineas success when becoming the first elite level winner trained in Tasmania for over 100 years that autumn.