The CS Hayes Stakes is a Group 3 sprint held at Flemington in February as a lead-up to the Australian Guineas. 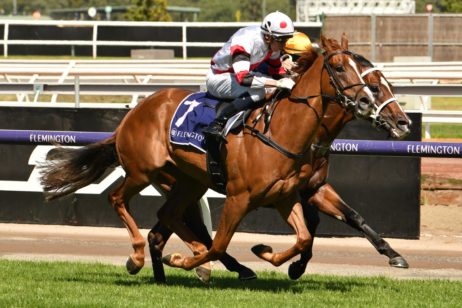 The CS Hayes Stakes is a Group 3 race held in mid-late February annually at the esteemed Flemington Racecourse in Victoria during the Melbourne Autumn Racing Carnival.

Run over the middle-sprint distance of 1400m, the CS Hayes Stakes is an event for three-year-old colts and geldings at set weights plus penalties and is worth $200,000 in total prize money. The handy runners that contest the CS Hayes Stakes will often progress on to the Group 2 Alistair Clarke Stakes (1600m) a fortnight later or the prestigious Group 1 Australian Guineas (1600m) in early March.

The 2022 CS Hayes Stakes took place at Flemington on Saturday February 19, 2022 and was won by the undefeated equal favourite Pinstriped ($5.50EF).

Click here to read more on the brave late win by the undefeated Group 1 Australian Guineas-bound Pinstriped in the 2022 CS Hayes Stakes results.

The latest CS Hayes Stakes 2022 betting odds and market links to Ladbrokes.com.au will be available the week of the race.

*Note: In 2022 the pre-race favourite Lightsaber was scratched at the barriers.

The CS Hayes Stakes field attracts a smart line-up of three-year-old colts and geldings each autumn, many eyeing a return to the track the next month for a shot at the Group 1 Australian Guineas over a mile.

The CS Hayes Stakes 2022 field and barriers will be released the Wednesday before the race runs on Black Caviar Lightning Day and will be published below.

The 2022 CS Hayes Stakes race nominations close the Monday of race week and will be listed in full below as soon as released by Racing Victoria.

CS Hayes Stakes results and winning times since 2000 are provided below.