The Triscay Stakes is a Group 3 sprint race for mares held at Royal Randwick on Apollo Stakes Day in February during the Sydney Autumn Racing Carnival. 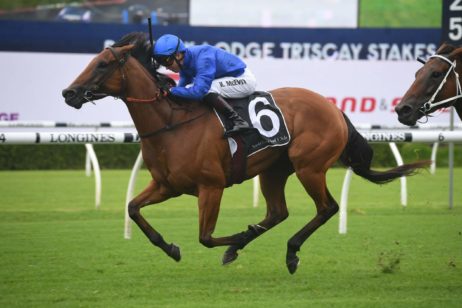 The Triscay Stakes is a Group 3 race run at Royal Randwick in early February during the Sydney Autumn Racing Carnival.

The event is a 1200m sprint race open to mares aged four-years-old and over and is run under quality handicap conditions. The Triscay Stakes offers $160,000 in total prize money and takes place as part of Apollo Stakes Day.

Mares in the Triscay Stakes field may be kicking off their autumn campaigns and could back-up the following month at Rosehill Gardens in the Group 3 Birthday Card Stakes (1200m) for fillies and mares. The best out of the race may also continue onto the Group 1 Coolmore Classic (1500m) in mid-March.

In 2021 Icebath finished third in the Triscay Stakes results and went on to run second in that autumn’s Group 1 Doncaster Mile (1600m) before winning the $2 million The Invitation in the spring.

The latest Triscay Stakes 2022 odds and betting market links from the country’s leading bookmaker Ladbrokes.com.au will be listed below once open so stay tuned.

Tailleur ($1.35 in 2021) was the last favourite in Triscay Stakes betting to salute for the punters.

The Triscay Stakes field attracts a class line-up of sprinting mares each autumn and is released by Racing NSW on the Wednesday before Apollo Stakes Day.

The official 2022 Triscay Stakes field and barriers are out on Wednesday February 9, 2022 and will be published in full below.

The Triscay Stakes 2022 nominations are due to be released on the Monday prior to the race and attract quality mares coming out of lead-up races including the Expressway Stakes at Rosehill a fortnight earlier or the previous month’s Magic Millions Fillies & Mares race on the Gold Coast.

The Triscay Stakes has been run since 1995 making it a relatively new race on the Australian Racing Calander. It is hosted by the Australian Turf Club (ATC) and is named after former star filly Triscay who completed the 1991 Queensland Guineas – Queensland Oaks double. It has been known by a number of different names including the Triscay Fillies and MAres Quality Handicap (1995) and the Triscay Fillies and Mares Quality Stakes (1996 – 2005).

The event started as a Listed race before gaining its current Group 3 status in 2014. It has been run at Royal Randwick since 2014 and was previously held at Rosehill Gardens, Canterbury Park and Warwick Farm Racecourse.

See below for a full list of Triscay Stakes winners and results going back to 2000.