The Kembla Grange Classic is a Group 3 event run in March at Kembla Grange Racecourse in New South Wales by a field of three-year-old fillies with ATC Oaks potential. 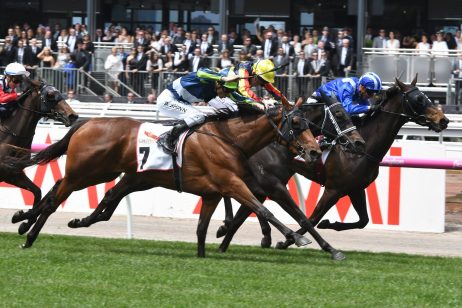 The Keith F Nolan Classic – now run as the Kembla Grange Classic – is a Group 3 race run at Kembla Grange Racecourse each March by the Illawarra Turf Club during the autumn.

The event is a 1600m mile event for three-year-old fillies at set weights plus penalties and offers $200,000 in total prize money.

Fillies in the Kembla Grange Classic field may come off a Sydney Autumn Racing Carnival lead-up in a race like the recently upgraded Group 1 Surround Stakes (1400m).

The best out of the race may back-up in a tougher Sydney race including the Group 1 Vinery Stud Stakes (2000m) at Rosehill Gardens at the end of the month and Single Gaze (2016) was the last filly to complete the Keith Nolan Classic – Vinery Stud Stakes double. More recently, Frankely Awesome ran second in both the Kembla Grange Classic and Vinery Stud Stakes in 2019. The Group 1 ATC Oaks (2400m) during Royal Randwick’s The Championships in April is another later option.

The Kembla Grange Classic 2020 ran on Friday March 13, 2020 and was won narrowly by the Godolphin-raced Asiago.

The James Cummings-trained Asiago ($12) made it two wins from as many starts at the track scoring a narrow victory over Shout The Bar ($10) in a narrow Kembla Grange Classic 2020 result. In a thrilling finish under a length separated the first six over the line, jockey Hugh Bowman holding on to take it out with Godolphin’s Group 1-bound daughter of Medaglia D’Oro.

The autumn’s best Kembla Grange Classic 2020 betting odds will be available below the week of the race complete with market links to Ladbrokes.com.au.

The Keith F Nolan Classic field – now the Kembla Grange Classic – features a classy line-up of three-year-old fillies progressing to tougher and or longer distance races during the autumn in Sydney.

The official 2020 Kembla Grange Classic field and barriers are set for release the Wednesday before the race and will be published in full below.

The Kembla Grange Classic 2020 final field features a capacity line-up of three-year-old fillies led in betting by the Team Snowden-trained Thousand Guineas runner-up Missile Mantra dropping back in grade after her fifth in the Group 1 Surround Stakes last start.

The Keith Nolan Classic – officially the Keith F Nolan Classic – is named in honour of the Illawarra Turf Club’s founding chairman Keith F. Nolan who passed away in 2005. The event has been run and won since 2003 and the inaugural winner was Ain’t Seen Nothing. Since then plenty of quality fillies have won the race including Hot Danish (2007), Allez Wonder (2009), Brazilian Pulse (2011), Appearance (2012) and Single Gaze (2016).

The race began as a Listed event and gained its current Group 3 status in 2010. For one year in 2011 the Keith Nolan Classic ran at Rosehill Gardens due to the unsuitable conditions at Kembla Grange Racecourse, which is one of New South Wales’ leading provincial race tracks.

See below for the full list of Keith Nolan Classic winners and results going back to the inaugural edition in 2003.