The The Vanity is a Group 3 race for Group 1-bound three-year-old fillies run at Flemington Racecourse during February on Black Caviar Lightning Day each autumn carnival. 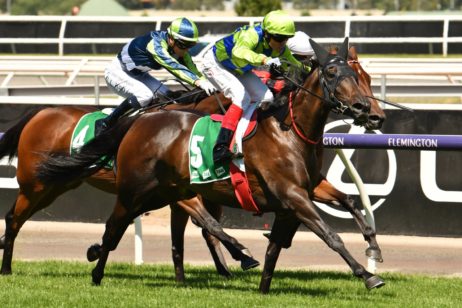 The Vanity is a Group 3 race run at the famous Flemington Racecourse in February during the annual Melbourne Autumn Racing Carnival.

The 1400m set weights plus penalties event is open only to three-year-old fillies and offers $200,000 in total prize money as of 2022. It is one of the support races on the Black Caviar Lightning Day program that is headlined by the Group 1 Black Caviar Lightning (1000m) for sprinters. The meeting is also host to the Group 3 CS Hayes Stakes (1400m) for colts & geldings with the Australian Guineas in sight.

More recently, the 2017 The Vanity winner Kenedna ran third int he Kewney Stakes before a stellar winter bid that included a second in the Group 1 Australasia Oaks (2010m) in Adelaide. That followed the Kewney Stakes second by the 2016 The Vanity champ Don’t Doubt Mamma.

The best fillies out of The Vanity may take on the boys in the Group 1 Australian Guineas (1600m) the following month or head to Sydney for elite level races including the Group 1 Vinery Stud Stakes (2000m) at Rosehill or Randwick’s Group 1 ATC Oaks (2400m) during April’s ‘The Championships’.

The latest The Vanity 2022 odds and betting prices on the three-year-old fillies will be listed below as soon as markets are open at Ladbrokes.com.au.

The Vanity field features a smart line-up of fillies looking to head towards tougher autumn runs in the coming weeks in both Melbourne and or Sydney, and is released by Racing Victoria the Wednesday before the race.

The official 2022 The Vanity Stakes field and barriers are released on the Wednesday of race week and will be published below.

A quality line-up of three-year-old fillies faces off in The Vanity 2022 final field this weekend with markets led by the Ciaron Maher & David Eustace-trained Socialist coming off a $2 million Magic Millions 3YO Guineas third at the Gold Coast last month.

The Vanity 2022 nominations close on Monday February 14, 2022 and will be released in full below as soon as available.

Note: Nominations have been extended until 10:00am (AEDT) on Tuesday.

The Vanity has been run and won since 1987 and won by some classy fillies over the years including subsequent Caulfield Cup winner Southern Speed (2011) and Solicit (2014). Originally run as a Listed race it was upgraded to its current Group 3 status in 2000. Along with Flemington it has taken place at Sandown Racecourse (1997) and Moonee Valley (2007). The race distance has changed several times, which has affected the winning times.

See below for a full list of The Vanity results and winners going back to 2000.