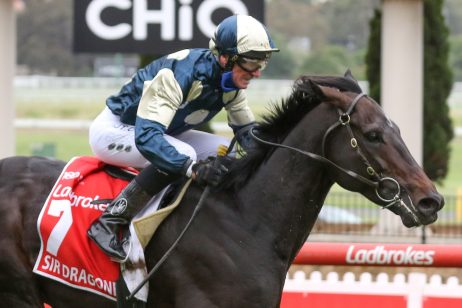 The Star Kingdom Stakes – formerly known as the Sebring Stakes – is a Group 3 race for sprinters run at Rosehill Gardens Racecourse in late March (early April in 2021) on Tancred Stakes Day.

A nice lead-up race to the Star Kingdom Stakes is the Group 3 Maurcie McCarten Stakes (1100m) held at the track a fortnight earlier.

During the autumn many Star Kingdom Stakes graduates step-up in distance for a shot at the Group 1 All Aged Stakes (1400m) at Randwick in April, a race the 2107 winner Jungle Edge ran third in next race.

The Star Kingdom Stakes 2021 ran on Saturday April 3, 2021 and was won first-up by the Peter & Paul Snowden-trained Signore Fox.

The Peter & Paul Snowden-trained Signore Fox rocketed to victory the closing stages in the Star Kingdom Stakes 2021 results in a brilliant first-up win, the horse ridden by James McDonald for the hoop’s fifth win from as many starts aboard the five-year-old.

The autumn’s best Star Kingdom Stakes 2021 betting odds and market links to Ladbrokes.com.au will be available below the week of the race.

The Star Kingdom Stakes field attracts a smart field of sprinters, many of which go on to contest tougher races over the coming months during the autumn and winter racing carnivals.

The official 2021 Star Kingdom Stakes field and barriers are out on Wednesday March 31, 2021  and will be published in full below as soon as released by Racing NSW.

The Star Kingdom Stakes 2021 nominations close on Monday March 29, 2021 and will be released right here once announced.

The Star Kingdom Stakes has been run and won since 1979 and the inaugural winner was The Judge. Since then quality sprinters including Mustard (2006), Swift Alliance (2010-11), Flamberge (2014) and Malaguerra (2016) have added their names to the list of Star Kingdom Stakes winners.

Also known in recent years as the Sebring Stakes (2010-2014), the event is named in honour of five time Leading Australian sire Star Kingdom whose progeny won the first five editions of the Golden Slipper Stakes. The race has been contested over both 1100m and 1200m.

See below for a complete list of the recent Star Kingdom Stakes winners and results going back to the year 2000.