The Blue Diamond Fillies Preview is a Group 3 race run in late January as a traditional lead-up to the Group 1 Blue Diamond Stakes in February each autumn. 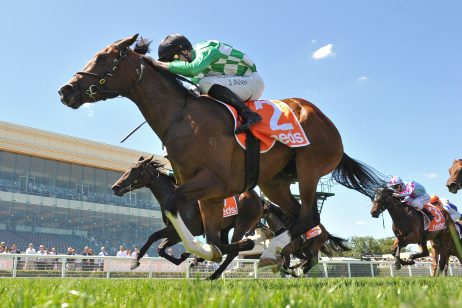 The 2021 Blue Diamond Preview (Fillies) is a Group 3 race for two-year-old fillies run at Caulfield Racecourse in late January.

The 1000m sprint is a traditional lead-up to the Group 1 $1.5 million Blue Diamond Stakes (1200m) the following month during the Melbourne Autumn Racing Carnival and offers $160,000 in total prize money. Miracles Of Life (2013) was the last winner of the Blue Diamond Fillies Preview – Blue Diamond Stakes double.

The latest Blue Diamond Fillies Preview 2021 odds will be listed below complete with market links to Ladbrokes.com.au for you to back your Blue Diamond tips at the best price.

The Blue Diamond Fillies Preview field features a quality line-up of lightly-raced two-year-old fillies at the start of their autumn campaigns and is released by Racing Victoria the week of the race.

The 2021 Blue Diamond Fillies Preview final field features 11 young fillies including last November’s Group 3 Ottawa Stakes winner Dosh drawn the rails, and the favourite Frost Flowers coming off a lead-up win at Flemington and due to be ridden by Jamie Kah.

From 1982-83 the race was run over 1200m, but has been contested over a shorter 1000m distance since 1984. Sandown Racecourse has also hosted the Blue Diamond Preview races on a number of occasions. The 2005 edition of the race was declared by stewards as a ‘No Race’ after two of the fillies had a “flying start” and jumped through the stalls before the barriers officially opened.

See below for a complete list of Blue Diamond Preview winning fillies and results going back to 2000.