The 2019 San Domenico Stakes is a Group 3 event hosted at Royal Randwick Racecourse in August for Golden Rose Stakes hopefuls. 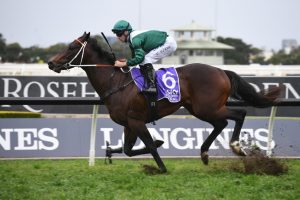 The San Domenico Stakes is a Group 3 event held at Royal Randwick Racecourse every August for three-year-olds early on during the Sydney Spring Racing Carnival.

Raced over a short distance sprint of 1100m, the San Domenico Stakes allows progressive young sprinters to display their skills ahead of tougher spring runs in races like the Group 1 Golden Rose Stakes (1400m) the following month.

Most recently the 2018 San Domenico Stakes winner Graff went on to run third in the Golden Rose Stakes that year behind The Autumn Sun.

With a grand total of $160,000 in prize money on offer, the San Domenico Stakes is a lucrative black-type event for new season three-year-olds.

Contested under set weights plus penalties conditions, the San Domenico Stakes pits rising sprinters against each other and shows how they are placed ahead of upcoming Group 1 races for that age group.

Often, horses that make up the San Domenico Stakes field may have come via other races such as the Group 1 Blue Diamond Stakes or the Golden Slipper during their juvenile racing seasons.

Decent results in the San Domenico Stakes can act as a launching pad to other races such as the  Group 1 Coolmore Stud Stakes (1200m) at Flemington during the Melbourne Cup Carnival.

The official San Domenico Stakes 2019 results saw the untapped Team Hawkes-trained Exceedance show a brilliant turn of foot on the Heavy-rated track to fly pass Godolphin’s odds-on favourite, Vain Stakes winner Bivouac, and take out the Group 3 victory first-up. Exceedance has now firmed into top spot in early markets for the $1 million Golden Rose Stakes on September 28. The filly Anaheed did a good job in the lead, boxing on to run third against the boys.

Odds on the San Domenico Stakes 2019 horses complete with betting links to Ladbrokes.com.au will be provided right here the week of the race.

The San Domenico Stakes 2019 field of potential Golden Rose Stakes hopefuls will be announced on the Wednesday of race week and published in full below so stay tuned.

Just seven three-year-olds make-up the official 2019 San Domenico Stakes field this year but what the race lacks in numbers, it makes up for in class. Hot favourite to win next month’s Group 1 $1 million Golden Rose (1400m), Bivouac jumps from barrier five with Hugh Bowman aboard. The Godolphin-raced chases his third Group 3 win on the trot after a barnstorming 4 1/4 length win first-up in Caulfield’s Vain Stakes.

Update: Just 5 horses remain in the San Domenico Stakes 2019 Field after two scratchings. #2 Dubious (7) comes out in favour of a run in Melbourne’s Group 3 H.D.F. McNeil Stakes (1200m) at Caulfield instead; #1 Yes Yes Yes has also been withdrawn with trainer Chris Waller instead going straight to the Group 2 The Run To The Rose (1200m) on September 14.

The San Domenico Stakes was inaugurated in 1980, with Proud Knight seizing victory in the first edition of the race. Initially run over a length of 1000m, the race distance was briefly upgraded to 1100m for one year in 2008 and then permanently from 2011 onwards.

Gaining traction rapidly, the San Domenico Stakes held listed status for only four years, receiving an upgrade to Group 3 in 1945. In 1986, the race was upgraded again to Group 2, a class it held until 2005, when it was downgraded to Group 3.

The San Domenico Stakes has been held variously at three separate racecourses in Sydney. Since 1980, the venue has changed twelve times between Randwick, Warwick Farm and Rosehill Gardens, where it currently runs today.