The MVRC Champagne Stakes is a Group 3 event held at Moonee Valley and runs as the Scarborough Stakes this year as part of Moir Stakes Night. 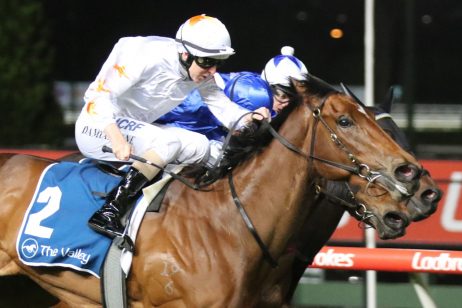 Known in 2021 as the Scarborough Stakes the race runs under the lights at Moonee Valley on Moir Stakes Night on a Friday evening in late September or early October. That same weekend features Saturday racing in Sydney for Golden Rose Day.

The 2020 Scarborough Stakes winner Swats That went on to run second against the boys in that spring’s Coolmore Stud Stakes results and also returned the following autumn for a third behind stablemate Nature Strip in the Group 1 Black Caviar Lightning in February of 2021.

Run over 1200m, the MVRC Champagne Stakes provides a viable alternative to the Golden Pendant at Royal Randwick the following day.

This year the MRC Champagne Stakes odds are open as the 2021 Scarborough Stakes and will be provided below complete with links to the betting markets at Ladbrokes.com.au as soon as released.

Fillies may come into the race now run as the Scarborough Stakes field via a number of different spring lead-ups including the Group 2 McEwen Stakes (1000m) contested at the same track in early September or the Group 2 Danehill Stakes (1200m) run down the straight at Flemington a fortnight before. In 2017 the Scarborough Stakes winner Houtzen improved on a lead-up third in the McEwen Stakes to easily account for a field of fellow fillies.

The 2021 MVRC Champagne Scarborough Stakes field of final acceptances is released on the Wednesday leading up to Moir Stakes night. The official 2021 Scarborough Stakes Final Field & Barrier Draw will be published in full below as soon as announced.

The 2021 Scarborough Stakes field features 11 three-year-old fillies including the undefeated Morning Melody chasing a third win on the trot.

The 2021 MVRC Champagne Stakes nominations close on the Monday of race week and will be detailed in full below as soon as released.