The Quezette Stakes is a Group 3 sprint for three-year-old fillies run at Caulfield Racecourse that serves as a lead-up to the Coolmore Stud Stakes. 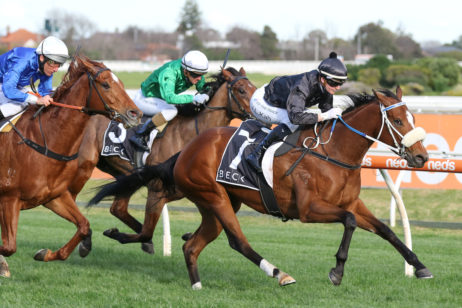 The Quezette Stakes is a Group 3 race for three-year-old fillies run at Caulfield Racecourse in mid-August.

The Quezette Stakes field is restricted to three year old fillies, the majority of which are kicking off their Melbourne Spring Racing Carnival campaigns. Run under set weights with penalties, the Quezette Stakes gives punters a nice early guide to tougher upcoming race for the young fillies including Group 1 Thousand Guineas (1600m) in October or for young sprinters the Group 1 Coolmore Stud Stakes (1200m) at Flemington over the Melbourne Cup Carnival.

Offering $200,000 in total prize money as of 2021 the race is a good early kick-off for fillies chasing Black-Type as three-year-olds.

Following success in the Quezette Stakes, some fillies might go on to race in the HDF McNeil Stakes or the Thousand Guineas Prelude.

The Quezette Stakes 2021 took place on Saturday August 14, 2021 and was won by the Peter Moody-trained favourite Gimmie Par.

Betting markets and Quezette Stakes 2021 odds will open at Ladbrokes.com.au the week of the race with links to be made available below for punters.

Gimmie Par ($2.70 in 2021) was the last favourite in Quezette Stakes betting to salute for the punters.

The official Quezette Stakes 2021 final field and barriers are announced on the Wednesday leading-up to PB Lawrence Stakes Day and will be published in full below.

The Quezette Stakes field draws a class line-up of fillies and has been won by some very nice types over the years. The 2016 Quezette Stakes winner I Am A Star went on to win the Group 1 Myer Classic (1600m) over the older mares that Cup Carnival.

The early Quezette Stakes 2021 nominations are taken the Monday leading-up to the race, the full list of hopeful fillies to be published in full below once announced.

Quezette Stakes results and winning times since 2000 are listed below.