The Canonbury Stakes is a Group 3 event held at Rosehill Gardens Racecourse on Expressway Stakes Day and is an early Golden Slipper Stakes lead-up. 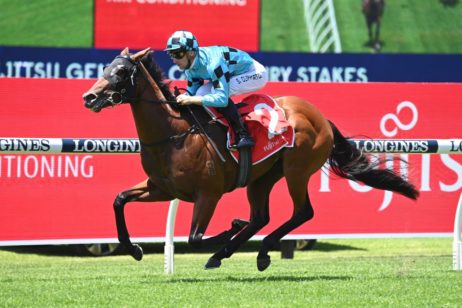 The Canonbury Stakes is a Group 3 race for two-year-old colts & geldings run at Rosehill Gardens in late January or early February as part of the Expressway Stakes Day line-up.

The meeting is held at the very start of the prestigious Sydney Autumn Racing Carnival and is headlined by the weight-for-age Group 2 Expressway Stakes (1200m). The Canonbury Stakes is a set weights plus penalties sprint contested over 1100m. It is open only to male two-year-old runners and is accompanied on the card by the fillies’ equivalent – the Group 3 Widden Stakes (1100m).

Many of the youngsters in the Canonbury Stakes field are on debut, while some may have had an earlier run in a summer race in Sydney or even over the previous spring carnival season. After the race a likely next-up option is the Group 2 Todman Stakes (1200m) at Randwick in early March. Both races are key lead-ups to the famous $5 million Group 1 Golden Slipper Stakes (1200m) run at Rosehill in March.

Other Canonbury Stakes graduates may head south to Melbourne over the autumn for a shot at the Group 1 $1.5 million Blue Diamond Stakes (1200m), which the 2017 Canonbury Stakes winner Pariah finished runner-up in.

The form of the 2021 Canonbury Stakes was franked with the runner-up Home Affairs winning the Group 2 Silver Slipper Stakes next-up before a Group 1 Coolmore Stud Stakes victory in Melbourne that spring.

The Canonbury Stakes 2022 ran on Saturday January 29, 2022 at Rosehill Gardens Racecourse and was won in runaway fashion by Best Of Bordeaux ($6.50) on debut.

The Kacy Fogden-trained Queenslander Best Of Bordeaux ($6.50) produced a powerhouse performance on debut to charge home for a nearly five-length win from the front in the 2022 Canonbury Stakes results to firm in from $101 to $15 to win the Group 1 Golden Slipper in March.

The top Canonbury Stakes 2022 odds and betting market links to Ladbrokes.com.au will be available here as soon as available this autumn carnival.

The Canonbury Stakes field secures a quality line-up of young colts & geldings in the early stages of their turf careers, many eyeing a run in the iconic Golden Slipper Field later in the autumn.

The official 2022 Canonbury Stakes field and barriers are set for release on the Wednesday leading-up to the race and will be published in full below.

The Canonbury Stakes 2022 final field is down to five youngsters after the scratching of three original acceptors with markets led by the Chris Waller-trained debutant Great Barrier Reef in barrier three.

Early nominations for the Canonbury Stakes in 2022 close the Monday of race week and will be published below once announced.

The race is named in honour of Canonbury, a house built near Sydney’s Darling Point in 1911. The Australian Jockey Club (AJC) – now the Australian Turf Club (ATC) – has owned Canonbury house since the death of its builder in 1919.

See below for a full list of Canonbury Stakes winners and results dating back to 2000.