The Ethereal Stakes is a Group 3 race for VRC Oaks-bound fillies held on Caulfield Cup Day. 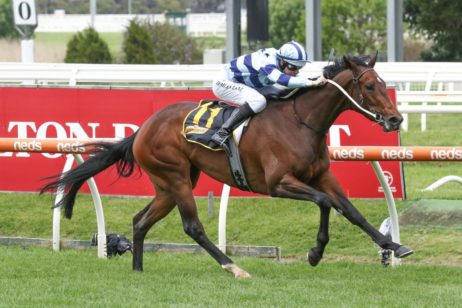 The Ethereal Stakes is a Group 3 race held in October on Caulfield Cup Day for VRC Oaks-bound fillies during the Melbourne Spring Racing Carnival.

Named in honour of the 2011 Caulfield Cup – Melbourne Cup double winning mare Ethereal, the race is open only to three-year-old fillies and takes place at set weights plus penalties.

Offering $200,000 and contested over 2000m, the Ethereal Stakes is a traditional lead-up into the Group 1 VRC Oaks (2500m) held the following month at Flemington during the coveted four-day Melbourne Cup Carnival.

The 2021 edition of the Ethereal Stakes ran on Saturday October 16, 2021 as part of a bumper Caulfield Cup Day program and was won in style by Daisies.

The Mick Price & Michael Kent Junior-trained Daises ($10) was too strong getting out over 2000m on a wet track, jockey Damian Lane making a terrific mid-race move to get up on the outside and lead from there all the way to the line for a dominant win in the 2021 Ethereal Stakes results ahead of the Kennedy Oaks on November 4th.

Betting on the Ethereal Stakes 2021 opens the week of the race with all-in markets available at Ladbrokes.com.au as soon as the nominations are taken.

The latest Ethereal Stakes odds on the Oaks-bound fillies will be provided below as soon as released.

Verry Elleegant ($2.35 in 2018) was the last favourite in Ethereal Stakes betting to salute for the punters.

Early nominations for the Ethereal Stakes in 2021 are confirmed on the Monday leading-up to the race and will be updated below.

The Ethereal Stakes was first conducted in 2000 making it one of the newer editions to the Melbourne Spring Racing Carnival.

The event has gone by many names due to sponsorship purposes including its inaugural title – the Foster’s Light Ice Handicap. Originally it was a handicap race, but it is now a set weights plus penalties feature.

The Ethereal Stakes became a key VRC Oaks lead-up when upgraded to Group 3 status in 2015. It has been won by many quality fillies including Set Square (2014), that year’s VRC Oaks winner Pinot (2017) and the Chris Waller-trained Verry Elleegant (2018).

Ethereal Stakes results since the upgrade to Group 3 status are listed below.