The Bendigo Cup is a Group 3 staying event held at Bendigo Racecourse on the Wednesday before Victoria Derby Day. 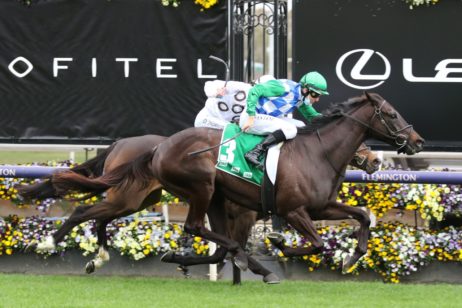 The Bendigo Cup is a 2400m staying event held at Bendigo Racecourse in Victoria during the Melbourne Spring Racing Carnival.

A now Group 3 event held towards the end of October or early November on the Wednesday before the Victoria Derby Day meeting at Flemington on the first Saturday in November kicks off the Melbourne Cup Carnival action, the Bendigo Cup is held under handicap conditions and is open to horses aged three years and older.

The Bendigo Cup can act as an effective lead up race to the Melbourne Cup. Horses generally target the Bendigo Cup following good runs in other events such as the listed Cranbourne Cup  or even non black type events at nearby tracks, including major Melbourne racecourses.

Quite often, horses that get a good run in the Bendigo Cup will go on to other country cups at a similar grade, such as the Ballarat Cup. In recent times, as top quality horses have contested this event more often, races like the Group 3 Queen Elizabeth Stakes (2600m) at Flemington on Emirates Stakes Day become a nice next-up option. Francis Of Assisi (2016) was the last horse to win the Bendigo Cup – Queen Elizabeth Stakes double.

In more recent years the Bendigo Cup has started to attract and be dominated by international visitors in much the same way as the other spring cup features.

The Bendigo Cup 2021 ran Wednesday October 27, 2021 and was won by Wentwood who is not entered for the Melbourne Cup.

The Maddie Raymond-trained Wentwood ($8.50 @ Ladbrokes.com.au) made the most of an inside draw with Harry Coffey producing a perfectly-timed ride to deny favourite Smokin’ Romans victory in the 2021 Bendigo Cup results that ended the Melbourne Cup dreams of a number of horses.

The latest Bendigo Cup 2021 betting markets will be listed below, fixed win pricing provided by Ladbrokes.com.au for you to back your Bendigo Cup tips at the best prices.

The Bendigo Cup field has a capacity of 16 stayers, but rarely runs with this many starters. Spring gallopers may come into the Bendigo Cup field via a number of different lead-up races including the Group 3 Coongy Cup (2000m) on Caulfield Cup Day or the Group 2 Herbert Power Stakes (2400m) a week earlier.

The 2021 Bendigo Cup field is released on the Monday of race week and will be published in full below.

The Bendigo Cup 2021 final field has attracted a host of stayers still entered for the $8 million Lexus Melbourne Cup but sitting outside the top 24 on the order of entry including the Phillip Stokes-trained Amade, Mosh Music for Archie Alexander and the consistent Tooradin.

Click here to read more about the key stayers in the 2021 Bendigo Cup field and betting markets.

Early nominations for the Bendigo Cup in 2021 close the Thursday prior to the race and will be listed below.

The Bendigo Cup was inaugurated in 1868, and was then known as the Sandhurst Cup. Old England was the first winner.

The new Bendigo track was established relatively recently in 1998. The grandstand was built in 1902, making it one of the oldest in the region.

The Bendigo Cup was previously held in November. In 2009 the race date was shifted to October to encourage classier horses to contest it on the way to bigger events. Following the 2010 edition the decision was made to increase the race distance again to 2400m (as it was in 2008 and prior) to further improve the race’s suitability as a lead up event.

Notable recent Bendigo Cup winners include Gallic (2004, 06), Puissance De Lune (2012), Sertorius (2013), The Offer (2015) and Francis Of Assisi (2016) who went on to win the Group 3 Queen Elizabeth Stakes (2600m) during the Melbourne Cup Carnival next start after being balloted out of the Melbourne Cup field. The 2017 Bendigo Cup winner Qewy handed English trainer Charlie Appleby back-to-back wins in the race setting a new race record with his 2:27.50 second victory.