The Ottawa Stakes is a Group 3 sprint for 2YO fillies held at Flemington Racecourse on Kennedy Oaks Day. 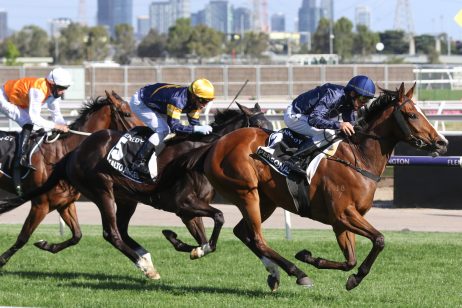 The 2021 Ottawa Stakes is a key support act on Oaks Day at Flemington held on the first Thursday of November, two days after Melbourne Cup Day featuring the ‘Race That Stops A Nation’.

Run under set weights, the Ottawa Stakes is restricted to two-year-old fillies. It is run over a brief sprinter’s distance of 1000m and pays $200,000 prize money.

The Ottawa Stakes shares a race program with the Group 1 $1 million Kennedy Oaks (2500m) for three-year-old fillies along with the Group 3 Red Roses Stakes.

The majority of juvenile fillies in the Ottawa Stakes field are making their debuts and it is a huge thrill for connections to have a starter on the country’s most popular day of racing. Plenty of the best fillies out of the Ottawa Stakes go on to contest tougher races over their career. The 2016 Ottawa Stakes third placed Madeenaty finished third in the following year’s $2 million Magic Millions 2YO Classic (1200m) at the Gold Coast, while the 2015 runner-up Prompt Response would go on to win in Group 2 company.

The Debutant Stakes at Caulfield can serve as a nice lead-up race into this, while some of the best out of the Ottawa Stakes may return the following autumn for a shot at the Group 1 Blue Diamond Stakes (1200m).

The 2021 Ottawa Stakes ran at Flemington on Thursday November 4, 2021 and was won by debutant See You In Heaven who was originally an emergency runner.

The Ottawa Stakes 2021 betting odds on the young fillies racing as one of the key Kennedy Oaks Day support races will be available below complete with market links to Ladbrokes.com.au as soon as available.

Dosh ($5.50 in 2020) was the last favourite or equal-favourite in Ottawa Stakes betting to salute for the punters.

Possible lead-up races for the fillies that aren’t debuting on Oaks Day include the Listed Debutant Stakes (1000m) at Caulfield on Caulfield Guineas Day in mid-October, the Listed Gimcrack Stakes (1000m) at Randwick in Sydney in late September or for the eligible runners in the lucrative Restricted Listed $250,000 Inglis Banner (1000m) at The Valley on Ladbrokes Cox Plate Day.

The official 2021 Ottawa Stakes Final Field & Barriers are announced on the Monday before the race and will be published in full below as soon as released.

A wide-open Ottawa Stakes 2021 field this year with the widely-drawn Sepoy filly Kiki Express (17) the narrow favourite coming off a lead-up win in the Listed Debutant Stakes at Caulfield. That form was franked in the first on Melbourne Cup Day with the second and third placegetters running the quinella in the Group 3 Maribyrnong Plate.

Early nominations for the Ottawa Stakes in 2021 close the Friday prior to the race on the eve of Victoria Derby Day.

The Ottawa Stakes was inaugurated in 1978 and two editions of the race were held that year. The next year it was made a listed race, whereas previously it had ran as a principal event.

The Ottawa Stakes was not run between 1986 and 1990. Following its return, it was regularly sponsored, with the sponsor often changing yearly. Some of the various names that the Ottawa Stakes has been known by include the Beck’s Bier Stakes, Toyota Victoria Stakes, Subaru Stakes, Myer Stakes, Jayco Stakes, Schiavello Stakes and 7News Plate.

Following the 2013 edition, the Ottawa Stakes was upgraded to Group 3.