The Pago Pago Stakes (1200m) is a Group 2 race worth $175,000 held at Rosehill in late March offering a Golden Slipper Stakes ballot exemption. 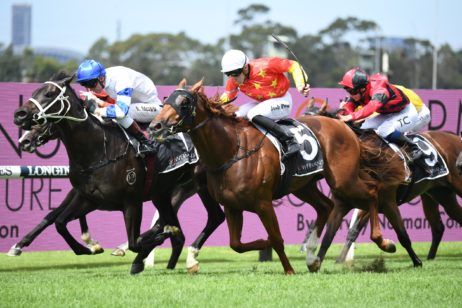 The Pago Pago Stakes is a Group 2 event held at Rosehill Racecourse during the annual Sydney Autumn Racing Carnival. Worth $175,000 in prize money, the 1200m sprint event is held in March on Coolmore Classic Day. The meeting is host to the Group 1 $600,000 Coolmore Classic (1500m) as well as a number of Group 2 and 3 status support acts.

The Pago Pago Stakes is a set weights race for two year old colts and geldings and each horse is required to carry 55.5kg for the race. The event is also the final lead up race to the lucrative Group 1 $3.5 million Golden Slipper Stakes (1200m) held in one week’s time and as a result the Pago Pago Stakes winner is exempt from ballot for the Golden Slipper, which is the world’s richest race for two-year-olds. The Group 3 Magic Night Stakes (1200m) for two-year-old fillies is the other Coolmore Classic Day race offering a Golden Slipper ballot exemption to the winner.

Chris Waller is in with his shot at a maiden Golden Slipper success with the stable’s Magic Millions Classic champ Shaquero ($9.50) bouncing back to win the Pago Pago Stakes 2021 narrowly ahead of Tiger Of Malay.

Click here to read more on the thrilling win by Shaquero in the 2021 Pago Pago Stakes results at Rosehill.

The updated Pago Pago Stakes 2021 betting odds provided by Ladbrokes.com.au on the Golden Slipper Stakes hopefuls racing in the Group 3 the week prior to the Group 1 will be available below as soon as released.

The Pago Pago Stakes field attracts a line-up of smart young colts and geldings looking to make their way into the following Saturday’s Golden Slipper field back at Rosehill Racecourse.

The official 2021 Pago Pago Stakes field and barriers will be released on Wednesday March 10, 2021 and published in full below.

First won by Cheval De Volee in 1978, the Pago Pago Stakes has also been known as the Darley Stakes. Since its inauguration, Stratum has been the only horse to win the Pago Pago/Golden Slipper double in 2005 and he also holds the record for the fastest win with 1 minute 9.23 seconds. The slowest winning time was recorded in 1990 by Pagan Jest with 1 minute 15.01 seconds.

See below for the full Pago Pago Stakes results dating back to 2000.