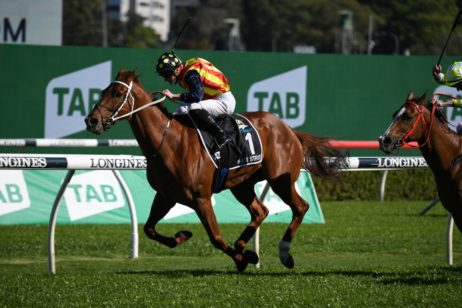 The 2021 VRC Queen Elizabeth Stakes – formerly the Queen’s Cup – is a 2600m quality handicap held at Flemington Racecourse on the first Saturday of November as part of Mackinnon Stakes Day.

Heading into the VRC Queen Elizabeth Stakes, horses might contest a variety of different races including the Group 1 Caulfield Cup (2400m) and the Group 2 Moonee Valley Cup (2500m), both popular lead up races. Some horses also back up from the Melbourne Cup to contest this event looking for a consolation prize just four days after the ‘Race That Stops A Nation’ is run and won.

Following the Queen Elizabeth Stakes, the Group 2 Zipping Classic (2400m) is a fairly common target. Some horses choose to rest prior to the Summer Racing Carnival or even until the autumn.

Warning ($3.40 in 2021) was the last Queen Elizabeth Stakes favourite in Melbourne to salute for the punters.

The 2021 VRC Queen Elizabeth Stakes field and barriers are released by Racing Victoria on the Wednesday before Mackinnon Stakes Day and will be published in full below once announced.

In its long history, there have been only two dead heats. The first was in 1895, between Wallace and Auraria. The second was more recently in 1997, between Vita Man and Bright Spot.

Throughout its history, the VRC Queen Elizabeth Stakes has not been held on a total of eight years.

The VRC Queen Elizabeth Stakes has been through many name changes since its inception, which are documented below.

*A furlong is approximately 200 metres.