The Widden Stakes is a Group 3 race that will take place at Rosehill Racecourse in Sydney each autumn leading up to the Golden Slipper Stakes. 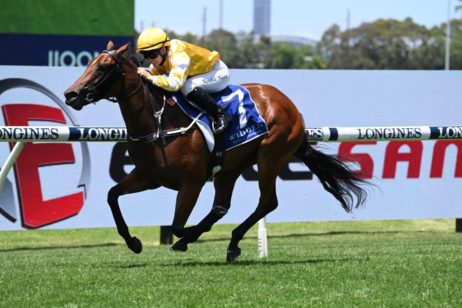 The Widden Stakes is Group 3 race run at Rosehill Gardens in late January or early February during the end of the summer and start of the famous Sydney Autumn Racing Carnival.

Fillies that run in the Widden Stakes field may be kicking off their careers first-up, or have run in the spring before in something like the Gimcrack Stakes (1100m) held at Randwick in September / October. The Widden Stakes can serve as a lead-up into the world’s richest race for two-year-olds – the Group 1 $3.5 million Golden Slipper (1200m) run back at Rosehill Racecourse in March.

In 2020 the Magic Millions 2YO Classic winning filly Away Game took out the Widden Stakes and went on to run fourth in that year’s Group 1 Blue Diamond Stakes in Melbourne and second in the Golden Slipper results.

The only fillies to date to complete the Widden Stakes – Golden Slipper Stakes double are Overreach (2013) and Mossfun (2014).

The 2022 Widden Stakes ran on Saturday January 29, 2022 at Rosehill Gardens and was won in an upset by the Richard & Michael Freedman-trained Queen Of The Ball who was dominant leading all-the-way as a $15 chance.

The Richard & Michael Freedman-trained Queen Of The Ball ($15) was outstanding fresh leading all-the-way to power home over her rivals by nearly four lengths in the Widden Stakes 2022 results to firm in Golden Slipper betting. Race favourite Ebhaar meanwhile was too keen throughout dropping out to run last of the finishers, while her stablemates Revolutionary Miss and Drisana had mixed luck running second and failing to finish respectively.

Click here to read more on the dominant 2022 Widden Stakes win by Queen Of The Ball.

The current Widden Stakes 2022 odds will be published below as soon as released at Ladbrokes.com.au complete with market links for you to lock in your Sydney Autumn Racing Carnival tips at the best prices.

Away Game ($2.10 in 2020) was the last favourite in Widden Stakes betting to salute for the punters.

The Widden Stakes field attracts a quality line-up of promising young fillies who are heading towards other similar races over the autumn in Sydney for two-year-olds including the Group 2 Sweet Embrace Stakes (1200m) held a month later at Royal Randwick and the Group 2 Reisling Stakes (1200m) in March before a Golden Slipper Stakes bid.

The official 2022 Widden Stakes field and barriers will be released by Racing NSW on the Wednesday of race week and will be published in full below.

Early nominations on the Widden Stakes in 2022 are taken on the Monday of race week and will be published below once available.

The Widden Stakes is named after Widden Stud, home to some of the country’s premier stallions and sires. It was inaugurated in 1943 as a 1000m Principal Race. It has been run over its current 1100m distance during 2005-07 and since 2009 onwards. The event gained Listed status in 1979 – 2013 before being upgraded to a Group 3 autumn feature from 2014.

There have been three racecourses to host the Widden Stakes – Randwick, Rosehill Gardens and Warwick Farm.

In 2020 Away Game became the first filly in over 20 years to carry more than 56.5kg to victory in the Widden Stakes.

See below for a full list of the Widden Stakes Winners & Results going back to 2000.