The Chairman's Stakes is Group 3 race for two-year-olds run in the summer as a lead-up to the Group 1 Blue Diamond Stakes. 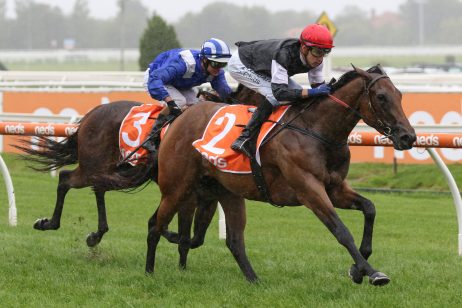 The 2021 Chairman’s Stakes is a Group 3 race contested at Caulfield Racecourse in late January or early February during the Melbourne Autumn Racing Carnival.

The meeting features two Group status races with the Chairman’s Stakes accompanied on the card by the Group 3 Manfred Stakes (1200m) for three-year-olds.

Run over a short sprint distance of 1000m the Chairman’s Stakes is open only to two-year-olds and is contested under set weights plus penalties conditions. The event offers $160,000 in total prize money.

The best MRC Chairman’s Stakes 2021 odds will be available below with autumn betting market links to Ladbrokes.com.au as soon as prices are open on the hopeful young two-year-olds.

The Melbourne Racing Club (MRC) Chairman’s Stakes field attracts a line-up of promising two-year-old sprinters each autumn, many heading towards a run in the season’s Blue Diamond Stakes field.

The official 2021 Chairman’s Stakes field and barriers are set for release on the Wednesday of race week and will be published in full below.

It was first run as the Chairman’s Stakes in 2010 – 2011 and again from 2013 to the present. It began as a Listed race and in 2014 gained its current Group 3 status. The race distance has also changed a number of times with the event always run between 1000 – 1200m depending on the racecourse. The Chairman’s Stakes has taken place at Sandown Racecourse and Caulfield Racecourse.

See below for a full list of MRC Chairman’s Stakes winners and results going back to the year 2000.