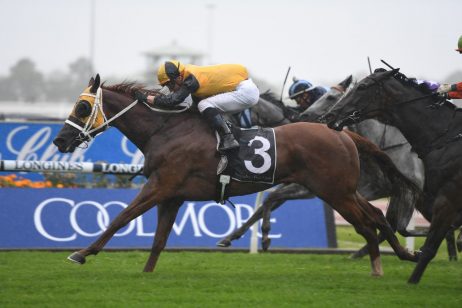 Run during the Sydney Autumn Racing Carnival, the meeting is headlined by the Group 1 Coolmore Classic (1500m) and features a host of other Group status support acts including the Group 2 Ajax Stakes (1500m), Group 2 Phar Lap Stakes (1200m), the lucrative Group 3 $350,000 Sky High Stakes (2000m) and the Maurice McCarten Stakes.

The Maurice McCarten Stakes 2021 ran on Saturday March 13, 2021 and was won by the favourite California Zimbol.

The season’s updated Maurice McCarten Stakes 2021 betting odds will be published below as soon as markets are released at Ladbrokes.com.au.

California Zimbol ($3 in 2021) was the last favourite in Maurice McCarten Stakes betting to salute.

The Maurcie McCarten Stakes field attracts a decent quality of sprinters, some of which may be gearing up towards tougher autumn runs, and is released by Racing NSW on the Wednesday before Coolmore Classic Day.

The official 2021 Maurice McCarten Stakes field and barriers are released on Wednesday March 10, 2021  and will be published in full below.

The Maurice McCarten Stakes was inaugurated in 1993 and the first winner of the race was Friend’s Venture. Since then quality types including Mustard (2004), Snippetson (2006), Atomic Force (2011) and Target In Sight (2015) have all recorded wins in the race.

See below for a recent list of Maurice McCarten Stakes results and winners going back to 2000.