The Maribyrnong Plate is a Group 3 sprint for two year olds held at Flemington Racecourse on Melbourne Cup Day on the first Tuesday of November. 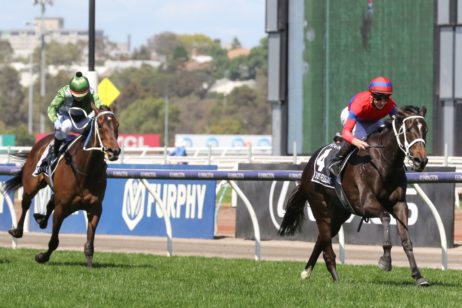 The Group 3 2021 Maribyrnong Plate is a 1000m sprint currently held at Flemington Racecourse on Melbourne Cup Day on the first Tuesday of November each Melbourne Cup Carnival.

Restricted to two year olds and run under set weights, the Maribyrnong Plate is an exciting test of sprinting skill. With $200,000 prize money, this is quite a lucrative race for the young ones who otherwise don’t have many dedicated black-type races during spring.

The Maribyrnong Plate, formerly held on the last day of the Cup Carnival and in recent years on Oaks Day, now shares a race schedule with the ‘race that stops a nation’ – the Group 1 $8 million Lexus Melbourne Cup (3200m).

Following the Maribyrnong Plate, horses will generally go for a spell to mature ahead of the autumn or the Listed Merson Cooper Stakes (1000m) at Sandown a week later might be an opportunity for some of the keener two year olds.

The form of the race often stacks-up in the following year’s autumn carnival including when the 2019 third placegetter Tagaloa returned to win the Group 1 Blue Diamond Stakes next prep.

The 2021 Maribyrnong Plate ran at Flemington on Melbourne Cup Day, Tuesday November 2, 2021 and was won by the Peter Moody-trained equal favourite Brereton.

It was a thrilling photo-finish to kick off racing on Melbourne Cup Day with the Peter Moody-trained Brereton just getting the bob over the Godolphin-raced Renosu to win the 2021 Maribyrnong Plate. Stablemate to the eventually beaten short-priced Melbourne Cup favourite Incentivise, Zoustar colt Brereton franked the form out of Caulfield’s Listed Debutant Stakes (1000m) improving on his lead-up second there to break his maiden status second-up on the big stage. The James Cummings-trained Renosu was third in the same race. The only other non-debutant in the event, Sepoy colt Lascars also prepared by Cummings ran third.

Brereton ($6EF in 2021) was the last favourite or equal favourite in Maribyrnong Plate betting to salute for the punters.

The 2021 Maribyrnong Plate field is released on the Monday leading-up to Kennedy Oaks Stakes Day with the full list of hopeful two-year-olds and the barrier draw to be published in full once announced.

The Maribyrnong Plate was inaugurated in 1871, with Argus Scandal taking out the initial edition of the race. The race has been held every year since then.

The Maribyrnong Plate once had Group 2 status, but was downgraded in 2005.