Royal Randwick is one of Sydney's premier racecourses. The biggest races run at Randwick include the Doncaster Handicap, the Sydney Cup, the Epsom Handicap and the Australian Derby. 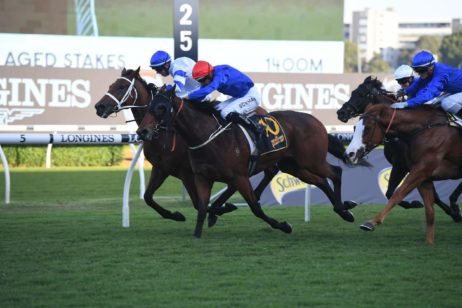 All Aged Stakes 2021 Results: Kolding Fights Back To Beat Savatiano

Royal Randwick is one of Australia’s most famous racecourses and features the largest racetrack in New South Wales. Originally known as Sandy Course in 1833, Randwick has been holding race meets for over 160 years. In 1992 the AJC was given the right to call it “Royal Randwick” after a request to Queen Elizabeth. Today, the track is regarded as Sydney’s racing headquarters.

Located just 5km from Sydney’s city central, the track hosts 45 meets a year. The track is 2,227 metres in circumference with sweeping bends and has a 410 metre straight with a slight uphill slope.

The venue is state of the art with over four training tracks, a bullring and equine pool and currently houses over 20 trainers and 650 horses.

The clockwise track hosts many of Australia?s most well known races including the Australian Derby and the highly anticipated Epsom Handicap. During April and May, Randwick hosts the Autumn Racing Carnival which includes four Group 1 races including:

Here are your transport options if you want to know how to get to Randwick Racecourse:

The nearest train station is 2.5kms away: Green Square, on the Airport and East Hills line.
Plan your journey with the Cityrail Timetable.

On weekend racedays, Sydney Buses departs from Chalmers Street, Central Station, and will take you directly to Randwick Racecourse. Check the Sydney Buses Timetable to plan your journey.

Randwick Racecourse is on Alison Road in Randwick, about 6.5kms from the Sydney CBD. It will take you about 15 minutes to drive via the Eastern Distributor, or 30 if you travel via Ocean Avenue. There is limited parking available off the High Street.

The Anthony & Sam Freedman-trained mare Real Of Flowers is into the $8...

There was a huge boilover in the 2021 Rough Habit Plate results on Doomben...

The Group 1 J.J. Atkins over the mile on Stradbroke Handicap Day could be...