The Newcastle Gold Cup is a Group 3 event held during September on the Friday before Randwick's George Main Stakes Day as a lead-up to The Metropolitan. 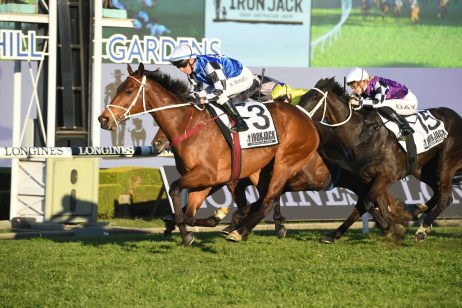 The Newcastle Gold Cup is a Group 3 staying event held at Newcastle Racecourse in mid-September.

Depending on their spring campaign plans and their results in the Newcastle Gold Cup, many of the runners will continue on to major feature races during the Sydney Spring Racing Carnival including Group 1 The Metropolitan (2400m) on Epson Handicap Day at Randwick.

The Newcastle Gold Cup winner is exempt from The Metropolitan ballot and Glencadam Gold (2012) was the last horse to do the double.

The year before, Green Moon (2011) won the Newcastle Gold Cup before a next-up second in the Group 1 Caulfield Cup (2400m). Green Moon also went on to win the 2012 Melbourne Cup over the two miles at Flemington.

Click here to read more on the Newcastle Cup 2020 win by Mugatoo.

The spring’s top Newcastle Gold Cup 2020 racing odds and betting market links to Ladbrokes.com.au will be available for punters below once released.

Mugatoo ($2.40 in 2020) was the last favourite in Newcastle Gold Cup betting to salute for the punters.

The Newcastle Gold Cup field attracts a quality line-up of second tier spring stayers each season, many coming off lead-up runs in races like the Listed Wyong Cup (2100m) a fortnight earlier or Rosehill’s Listed Premiers’ Cup (1900m) the month before. Carzoff (2018) was the last horse to do the Wyong Cup – Newcastle Cup double.

The official Newcastle Gold Cup Final Field & Barriers are announced on the Wednesday of race week.

Update: #5 Sir Charles Road (15) drawn wide has been scratched from the Newcastle Cup field and the only emergency, Nothing Too Hard (12) coming in for a run.

Nominations for the Newcastle Gold Cup close the Monday of race week and will be published below once announced.

The 2020 Newcastle Gold Cup Nominations feature a class list of 19 stayers including the defending champion Hush Writer coming off a third in the Wyong Gold Cup, winner of that race Paths Of Glory, Chris Waller’s Wyong and Grafton Cup runner-up The Lord Mayor, and the in-form Kris Lees-trained Mugatoo coming off a Group 3 Rosehill win.

A new Newcastle Gold Cup race record was set in 2019 when Gai Waterhouse won the event for the sixth time since 2000 with Hush Writer who took it out in 2 minutes, 23.25 seconds.

Newcastle Gold Cup results since 2000 are provided below.