The 2021 Vain Stakes is a Group 3 sprinting event held at Caulfield Racecourse ahead of the spring. 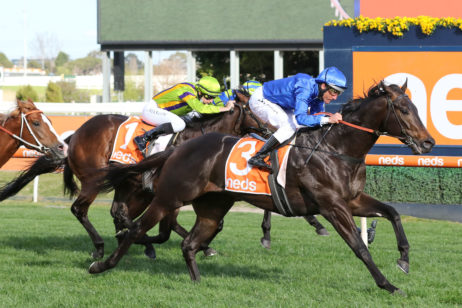 The 2021 Vain Stakes is an early Melbourne Spring Racing Carnival 1100m sprint that attracts some of the best new season three-year-old colts and geldings from both local and interstate stables.

Run under set weights plus penalties conditions, the Vain Stakes often features gallopers heading towards a race like the Group 1 Caulfield Guineas (1600m) back at the track in October over a mile.

Held on PB Lawrence Stakes Day, the Vain Stakes field tends to be filled out with fairly successful colts and geldings who already have decent black type experience. With a total purse of $200,000 as of 2021, Group 3 race is the male equivalent of the fillies-only Group 3 Quezette Stakes (1100m) held at the same meeting for Thousand Guineas hopes.

Due to the high quality nature of the Vain Stakes field, you’ll often see horses continue on to compete in the Melbourne Cup Carnival.

The 2021 Vain Stakes took place on Saturday August 14, 2021 and was won by the resuming Ingratiating for Godolphin.

The Group 1 Coolmore Stud Stakes on Derby Day is the long-term target for the James Cummings-trained Ingratiating ($3.20) who was excellent first-up winning the 2021 Vain Stakes.

Click here to read more on the good first-up win in the Vain Stakes 2021 by Ingratiating.

Betting on the Vain Stakes 2021 will be available here with market links to Ladbrokes.com.au once Racing Victoria announce the final field.

The 2021 Vain Stakes field and barrier draw are announced the Wednesday leading-up to P.B. Lawrence Stakes Day with full acceptances to be listed below.

The early Vain Stakes 2021 Nominations are taken by Racing Victoria on the Monday leading-up to race day, the full list of entries to be published right here once announced.

Inaugurated in 1992, the Vain Stakes has always attracted a strong assortment of young colts and geldings. Never Undercharge took out the first edition of the Vain Stakes with a thrilling run to set the standard of tight finishes that the Vain Stakes is known for.

Initially referred to as the Vain Quality Stakes, the race name was shortened to the Vain Stakes in 1995. For a year in 2010 the race was named the Lister Diesel Stakes.

Initially held at Sandown Park Racecourse, the Vain Stakes shifted to Caulfield for a year in 1994 and then again in 1997. From 2002 onwards, the race’s permanent home has been at Caulfield Racecourse.