The 2022 Melbourne Autumn Racing Carnival takes place from late January - April each year and is headlined by events such as the Blue Diamond Stakes, Australian Guineas and the Newmarket Handicap. The $5 million The All-Star Mile is now the richest race of the autumn and runs in March. 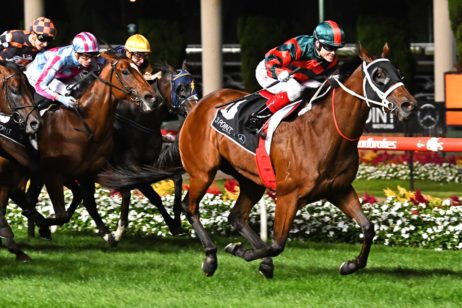 The Melbourne Autumn Festival runs late January until the end of March. The headline meetings include Blue Diamond Stakes Day at Caulfield in February and Flemington’s ‘Super Saturday’ in March featuring the Australian Cup and Newmarket Handicap.

All of the autumn race meetings in Victoria are hosted by the Melbourne Racing Club (MRC) and take place at the major metropolitan tracks around the state. The carnival is also host to the first Group 1 race of the new season when the CF Orr Stakes (1400m) lights-up Caulfield Racecourse in early to mid-February.

Lock in the best Melbourne Autumn Racing Carnival odds and tips at Ladbrokes this season!

The Melbourne Autumn Racing Carnival race days feature some of the country’s top Group 1 events and give punters a host of stars to enjoy a bet on at Ladbrokes.com.au over the start of the year.

Caulfield hosts Melbourne’s major Australia Day race meeting and the line-up is headlined by the:

The carnival’s opening Group 2 event runs at The Valley with the season’s top sprinters contesting the:

The Group 1 autumn racing action in Melbourne moves to the famous Flemington track for this meeting headlined by  three Group races:

The autumn Melbourne racing action heats up in late Feburary with 2022 Neds Blue Diamond Stakes Day headlined by the carnival’s feature race for three-year-olds. There are a total of eight Group races on the card including a trio of Group 1 races:

Flemington is in the spotlight again on the first Saturday in March for 2022 Australian Guineas Day headlined by the mile race for three-year-olds. There are now three Group events on the card in total:

‘Super Saturday’ at Flemington brings the Victorian autumn racing action to a peak with a double shot of Group 1 racing plus a subsequent five Group events supporting the elite level races on the card:

For 2022 the lucrative $5 million The All-Star Mile race will take place at Flemington Racecourse in mid-March the weekend after ‘Super Saturday’. Flemington becomes the first track to host the event twice having also held the inaugural edition back in 2019.

One of the biggest autumn meeting at Moonee Valley is held on the final Friday in March and features three Group races:

It may not be a Group status event, but the lucrative Mornington Cup is one of the most popular Victorian Cup races, runs the Saturday after the William Reid Stakes on the Mornington Peninsular and is headlined by the:

Officially the last of the Melbourne Autumn Racing Carnival feature race days, this meeting runs on Easter Saturday each year and is headlined by two Group races: