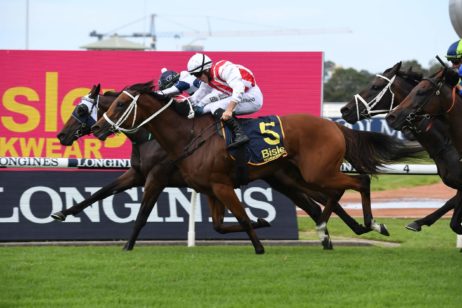 The Sky High Stakes is a Group 3 race held at Rosehill Gardens Racecourse on Coolmore Classic Day in March during the Sydney Autumn Racing Carnival.

Contested over 2000m the set weights plus penalties race is open to horses aged three-years-old and above and offers a lucrative $350,000 in total prize money. Coolmore Classic Day is headlined by the fillies and mares facing off in the Group 1 Coolmore Classic (1500m) and the meeting is host to a number of other Group status races. Other highlights on the card including the Group 2 Phar Lap Stakes (1500m), Group 2 Ajax Stakes (1500m), Group 3 Magic Night Stakes (1200m) and the Group 3 Pago Pago Stakes (1200m) for Golden Slipper Stakes hopefuls.

Click here to read more on the thrilling late win in the Sky High Stakes 2021 results by Toffee Tongue.

The autumn’s latest Sky High Stakes 2021 betting odds and market links to Ladbrokes.com.au will be available below the week of the race.

The Sky High Stakes field attracts a class line-up of stayers each autumn and many of the runners are heading towards the Sydney Cup over two miles at Royal Randwick.

The official 2021 Sky High Stakes field and barriers are set for release on Wednesday March 10, 2021 and will be published in full below.

The Sky High Stakes 2021 field features small but class line-up of runners including a number of former Group 1 winners led in betting by Godolphin-raced Colette who is odds-on to go one better than her Group 1 Chipping Norton Stakes second last time out.

The Sky High Stakes has been run and won since 1989 and the first edition of the race was won by Eye Of The Sky. Since then plenty of star stayers have won the event including Hartnel (2015) and Sir John Hawkwood (2016).

The race is named in honour of Sky High who won the Golden Slipper Stakes as a two-year-old in 1960 and the next year’s Epsom Handicap. It was first run as an unlisted race until 1992 when it gained Listed status and then Group 3 status later in 2014. Before 2014 it took place over 1900m and the distance was increased to the current 2000m in 2015. For one year in 2008 it took place at Canterbury Park and in 2016 the Sky High Stakes was changed from a quality handicap clash to a set weights plus penalties event.

See below for the full Sky High Stakes results and winners dating back to the year 2000.

The Richard & Michael Freedman-trained I Am Invincible filly Queen Of The...