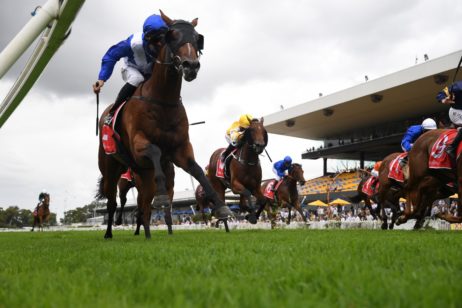 The Magic Millions Racing Carnival is the biggest and most anticipated thoroughbred racing event held at the Gold Coast Racecourse in Queensland. The fortnight-long festival takes place in January each year and is one of the most celebrated events in the Australian racing industry.

The whole carnival, which includes an array of attractions from its world-famous yearling sale to its major Magic Millions Race Day, brings in millions of dollars to the Queensland economy with high profile buyers and top-class trainers from around the globe travelling to the Sunshine State every Magic Millions carnival.

In the lead-up to the legendary race day, the Gold Coast Racecourse comes alive with a series of other entertainment – including yearling inspection days at the Magic Millions Sales Complex, smaller race days and famous luncheons and high teas such as the Women in Racing Magic Millions Luncheon.

Held on the second Saturday in January, Gold Coast Magic Millions Race Day draws an enormous crowd of excited spectators and eager punters ready to make millions of their own! In total the day has over $10 million in prize money to give away across the 10 races that take place and on the day the course is also home to the Magic Millions Fashions on the Field competition. As well as the two feature events eligible only to Magic Millions sale graduates, there are eight other stakes races on the day.

Magic Millions Day on the Gold Coast was the country’s first $10 million race day with prize money increased across the races in 2016. It has subsequently been surpassed by a number of other huge racing events including the world’s richest turf race – the $14 million The Everest – held during the spring in Sydney. Magic Millions betting is hugely popular at all bookmakers including Ladbrokes.com.au and all-in Magic Millions racing odds are on offer for both the 2020 Magic Millions 2YO Guineas and 2020 Magic Millions 3YO Guineas before the meeting takes place.