The Golden Slipper is the richest race for two-year-old horses in the world. The $5 million Group 1 runs at Rosehill Gardens in March during the Sydney Autumn Racing Carnival. 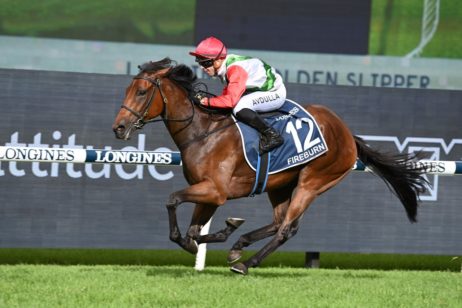 The Golden Slipper Stakes is one of the premier races of the Sydney Autumn Racing Carnival and is also the richest two year old race in the world. Held in late March at Rosehill Gardens, the 1200m sprint event is worth a lucrative $5 million in prize money as of 2022 and is the feature event on Golden Slipper Day.

A total of five elite level autumn races take place at the meeting with the Golden Slipper joined by the: Group 1 George Ryder Stakes (1500m), Group 1 Ranvet Stakes (2000m), the Group 1 The Galaxy (1100m) and the Group 1 Rosehill Guineas (2000m) for three-year-olds.

Their positioning two weeks before the Golden Slipper Stakes makes the Todman Stakes and Reisling Stakes the best guides to the Group 1 in recent years.

The Golden Slipper is also part of the “Golden Slam” for horses that continues with the Golden Rose for three-year-olds and The Golden Eagle for four-year-olds.

Note: The 2021 Golden Slipper Stakes was postponed until Saturday March 27th, 2021 due to heavy rainfall and unsafe track conditions at Rosehill Gardens.

The 2022 Golden Slipper ran on Saturday March 19, 2022 and was won in a fantastic effort by Sweet Embrace Stakes winning filly Fireburn ($12).

Trainer Gary Portelli enjoyed his second success with consistent Rebel Dane filly Fireburn ($12), winner of the Sweet Embrace Stakes last month, coming back off a horror run to fly home the closing stages and post a 2.44 length win over the Silver Slipper winner Best Of Bordeaux ($11) with the beaten favourite Coolangatta ($3.70F) third.

Click here to read more on the phenomenal 2022 Golden Slipper win by Fireburn.

Check out our comprehensive Golden Slipper Stakes Form Guide page for the latest facts and stats on the race.

Favourites have a fair recent record in the Golden Slipper results of the past decade with five saluting for the punters: Sebring (2008), Sepoy (2011), Overreach (2013), Vancouver (2015) and Farnan (2020) who handed Gai Waterhouse with her record seventh win in the classic.

The Golden Slipper 2022 odds provided by Ladbrokes.com.au will be available as soon as announced.

A filly doesn’t win her opening three starts and take out the $2 million Magic Millions Classic without class. Whether she can win the Slipper fresh though is the question. She was good with her gutsy, narrow victory back in mid-January’s feature but could be vulnerable first-up facing a number of fitter two-year-olds. She’s got a wide draw too that makes things a bit sticky for James McDonald. She hasn’t done anything wrong to date though and Maher/Eustace are master trainers of this age group. No Magic Millions winner has come back and won the Slipper without a run in between, can she be the first? Saluted as first-up favourite on debut and also has the Group 3 BJ McLachlan Stakes win in Brisbane on her record. She fires fresh, but she faces plenty of improvers. EACH WAY.

Think the fillies will have the measure of the colts and geldings this Slipper as they have plenty of times in recent years. Best bet? She’s Extreme was eye-catching third-up at this track / distance last Saturday posting a 1.44 length win in the Magic Night Stakes. She ran good time considering the Heavy (9) track and franked the Fireburn form after running second the start prior in the mud at Randwick in the Group 2 Sweet Embrace Stakes also over the six furlongs. Rock-hard fit, this daughter of Extreme Choice is out to become just the second filly since Bint Marscay (1993) to do the Magic Night – Slipper double, but she’s drawn a treat in gate six and Brett Prebble is booked for the ride. BEST BET.

There are so many at double-figures that have genuine claims at the title, including both Russian Revolution fillies for Team Snowden. Of the two, the odds are attractive on the widely-drawn Revolutionary Miss who will need luck from the gate but has been oh-so-consistent. She’s had four starts for a Group 2 win and three seconds. Her victory was in the Blue Diamond Prelude at Caulfield on the back of a Widden Stakes second at Rosehill. The Widden form was franked last weekend’ with the winner Queen Of The Ball taking out the Black Opal in Canberra to earn her Slipper spot. Revolutionary Miss meanwhile went on to go down the barest of margins to Daumier in the Group 1 Blue Diamond over the six furlongs. Whether the form out of Melbourne is the one to follow north is the only question, but happy to go with a proven Group 1 performer who is also proven the Sydney way. DANGER.

The official 2022 Golden Slipper Stakes field of final acceptances is due to be released by Racing NSW at 9am (local) on Tuesday March 15, 2022 and will be published below.

Click here to read more on the key runners in the Golden Slipper Stakes 2022 field and betting markets.

Click here for a full run down on the official 2022 Golden Slipper barrier draw.

Joe Pride’s Todman third place-getter #4 Shalatin (5) has been scratched from the Slipper field on vet’s advice after displaying lameness in the off-fore leg due to a plating issue, paving the way for Annabel Neasham’s Pago Pago runner-up Sweet Ride to gain a start.

Second acceptances for the 2022 Golden Slipper Stakes are taken by the Australian Turf Club (ATC) on Tuesday the 18th of January, 2022 at 3:00pm (AEDT).

Golden Slipper second acceptances further narrow down the list of hopefuls heading towards the autumn classic and are the first round of declarations taking place the year of the race, usually in late January or early February.

Late Golden Slipper Stakes entries are open until 11am (local time) on the Monday prior to the race but attracts a hefty $150,000 for owners.

The very early 2022 Golden Slipper Stakes nominations close to yearlings the winter prior to the race and typically attract over 2000 entries.

Following the nominations the Golden Slipper first acceptances close for 2022 close in October of 2021.

The Golden Slipper began as a Principle race from 1957 – 1978 before gaining its current Group 1 status in 1979. It was held over six furlongs until 1972 and then officially 1200m with the metric conversion coming in from 1973 onwards.

From 2009 – 2014 the Golden Slipper Stakes ran on the first Saturday of April. Prior to 2008 it ran on the Saturday before Good Friday. It now runs in March leading up to the two-day ‘The Championships’ on the first two Saturdays of April.

In both 2017 and 2018 the Golden Slipper trifecta was an all-filly affair.

In 2020 co-trainer Gai Waterhouse celebrated her record seventh success and first in partnership with Adrian Bott when the favourite Farnan saluted in front of a spectator free grandstand due to the COVID-19 pandemic.

In 2021 the original Golden Slipper Stakes race day was abandoned due to heavy rainfall and unsafe track conditions and postponed to the following Saturday.

See below for the full Golden Slipper winners and results dating back to 2000.