The Coolmore Classic is a Group 1 race for fillies & mares run at Rosehill Gardens during the Sydney Autumn Racing Carnival. 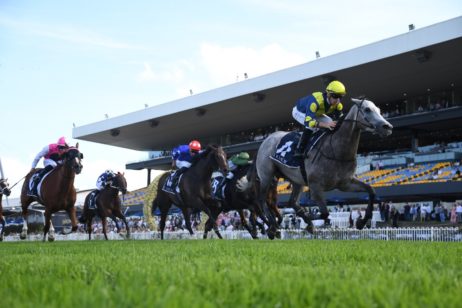 The Coolmore Classic, registered as the Tad Kennedy Stakes, is a quality Group 1 race held as part of the Sydney Autumn Racing Carnival in early-mid March each year.

Taking place midway through this exciting carnival as the marquee race on Coolmore Classic Day at Rosehill Gardens Racecourse, this 1500m event for fillies and mares is run under quality handicap conditions and is worth $600,000. The Coolmore Classic is the richest female race held during the Sydney Autumn Carnival and is the only Group 1 race at the meeting.

The 2022 Coolmore Classic took place on Saturday March 12, 2022 and was won by the Ciaron Maher & David Eustace-trained American import Lighthouse ($5).

The Ciaron Maher & David Eustace-trained Mizzen Mast mare from America, Lighthouse ($5), continued her rise through the ranks down under winning the 2022 Coolmore Classic results on the quick back-up with a strong performance over the 1500m. .

Click here to read more on the strong win by Lighthouse in the 2022 Coolmore Classic.

Betting on the Coolmore Classic heats up the week of the race with the latest markets to be made available for punters below courtesy of Ladbrokes.com.au. Coolmore Classic betting is often dominated by the best out of the Guy Walter Stakes along with any previous Group 1 winners that are in good autumn form.

The Coolmore Classic field attracts the season’s best middle-distance fillies and mares and is released on the Wednesday before the race.

The official 2022 Coolmore Classic field and barriers will be released by Racing NSW on Wednesday March 9, 2022 and published in full below.

A near capacity field of fillies and mares faces off in the Coolmore Classic 2022 this weekend including the Chris Waller-trained Espiona and Fangirl who are battling for favouritism in the markets.

Click here to read more on the key runners in the Coolmore Classic 2022 field and betting markets.

The 2022 Coolmore Classic nominations are set to close on Monday March 7, 2022 and will be listed below.

This race has been known as many different names over its history including the Winfield Classic, Orlando Wines Classic, Rosemount Wines Classic, Marlboro Classic, NSW Thoroughbred Breeder’s Stakes and the Fillies & Mares Classic.

Miss Personality won the inaugural running in 1973 when it was a principal race. Not long after in 1980 it gained Group 2 status and was eventually installed as a Group 1 race in 1984.

The high status, stakes and handicap conditions of the Coolmore Stud Classic ensure the field is always full of classy and competitive females. Outstanding fillies and mares who have won the Coolmore Classic include Sunline (2000 & 2002) carrying 60kg, Tuesday Joy (2007) and Assertive Lass (1997).

See below for a full list of Coolmore Classic results going back to 2000.