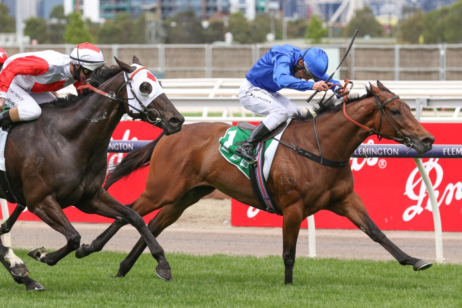 The Empire Rose Stakes, previously known as the Myer Classic, is a Group 1 race run over a mile (1600m) for the season’s best fillies and mares held on the opening day of the Melbourne Cup Carnival in late October / early November annually.

The weight-for-age race is one of only two Group 1 events for fillies and mares offered during the Melbourne Spring Racing Carnival. Held on the same day as the prestigious Victoria Derby, the Empire Rose Stakes now offers $1 million in prize money.

Raced at Flemington Racecourse the Empire Rose Stakes is also featured on the same day as the Kennedy Cantala Stakes and the Coolmore Stud Stakes, totalling four Group 1 races on the one day of elite spring racing.

The 2021 Empire Rose Stakes ran on Victoria Derby Day at Flemington – Saturday October 30, 2021 and was won in a diving finish by the Godolphin-raced Colette.

The Empire Rose Stakes field attracts a quality line-up of fillies and mares each spring coming off a variety of different lead-up races including the Group 2 Tristarc Stakes at Caulfield, with Red Tracer (2013) and Colette (2021) the latest mares to do the double.

Fillies in the Empire Rose Stakes field may come off a run the Saturday before in the Group 2 Moonee Valley Fillies Classic (1600m), a Cox Plate Day race that I Am A Star ran third in before her 2016 Empire Rose Stakes victory over the older mares.

The official Empire Rose Stakes 2021 Final Field & Barriers are announced by Racing Victoria on the Wednesday leading-up to Derby Day in Melbourne and will be published in full below.

Click here to read more on the key runners in the Empire Rose Stakes 2021 field and betting markets.

The Empire Rose Stakes 2021 nominations close the Monday of race week and the full list of early entries for the mile Group 1 on Victoria Derby Day will be published below once announced.

Since 1988 when Concordance won, the Myer Classic has gone through several sponsor names starting with Honda. First named “The Honda Legend”, the race went on to be named the Hong Kong Bank Stakes, Hardy Brothers Classic and Nestle Peters Classic. In 2005 it was named the Myer Classic. It’s registered name is the Empire Rose Stakes.

Regarded as the best sprint race for fillies and mares, the Myer Classic is often raced by horses which have competed in the Rose Of Kingston Stakes and the Tristarc Stakes. Although no Myer Classic winner has gone on to win the WS Cox Plate or Melbourne Cup, the Emirates Stakes has been won by Divine Madonna in 2006 and Bonanova in 1997.

In 2003 the event became a Group 2 race and was changed from a set weight race with penalties to a weight-for-age race. In 2004 it was upgraded to Group 1 status. In 2016 I Am A Star became the first three-year-old filly to beat the mares in the Myer Classic results in over 20 years, then the following year Shoals (2017) made it back-to-back wins for the youngsters with her narrow victory for the punters.

Read through the list of Empire Rose Stakes winners and place getters from 2000.