The Expressway Stakes is an early Sydney Autumn Racing Carnival Group 2 held at the start of the year as a lead-up to the Group 1 autumn races. 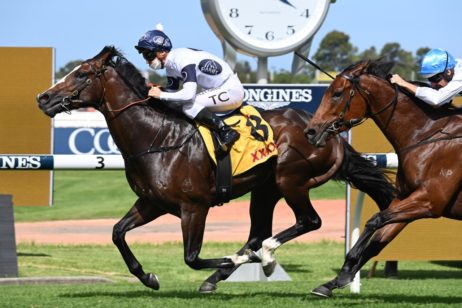 The $200,000 Expressway Stakes is also known as a good lead-up to the Group 2 Apollo Stakes (1400m) held in two weeks time at Royal Randwick. Horses may come into the Expressway Stakes first-up in early February and continue onto tougher autumn feature races such as the Group 1 Canterbury Stakes (1300m) at Randwick the following month.

Savatiano (2021) was the last runner to complete the Expressway Stakes – Canterbury Stakes double.

Alizee returned for the 2020 Expressway Stakes and ran second to Standout.

The Expressway Stakes 2022 ran on Saturday January 29, 2022 at Rosehill Gardens and was won in an upset by the Bjorn Baker-trained Overpass.

Australia’s premier front-running hoop Tim Clark produced a masterful on-speed ride to go all-the-way in the 2022 Australia Stakes results aboard the upset Bjorn Baker-trained winner Overpass ($9.50). The colt had a half-length to spare on the line over the fast-finishing mare Forbidden Love ($5.50) who held out the beaten favourite Anamoe ($2.30F).

The Expressway Stakes 2022 odds will be published below as soon as betting on the Group 2 at Rosehill is released.

Savatiano ($2.10 in 2021) was the last favourite in Expressway Stakes betting to salute for the punters.

The 2022 Expressway Stakes field is set for release on the Wednesday leading-up to the race and will be made available in full below.

The Expressway Stakes 2022 field is down to just seven runners after the withdrawal of Wisdom Of Water (8) and updated markets are led by Godolphin’s returning Cox Plate runner-up Anamoe.

The original 2022 Expressway Stakes nominations (extended until Tuesday) feature a dozen sprinters led in all-in betting by Godolphin’s star colt Anamoe returning for the season after his last start photo second in the Ladbrokes Cox Plate.

First held in 1974 as a principal race, the Expressway Stakes was won by I’m Scarlet and remained that status until 1979 when it became a Group 2 race.

The Expressway Stakes winners and results going back to 2000 are listed below.