The Vinery Stud Stakes is a Group 1 race for three-year-old fillies run at Rosehill Gardens on Tancred Stakes Day as a key lead-up to the Australian Oaks during the autumn. 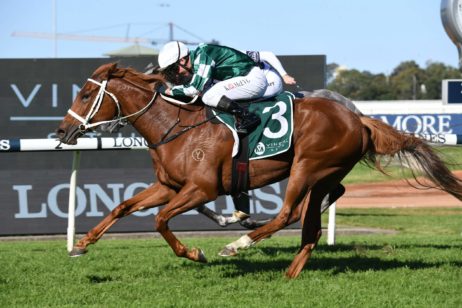 The Vinery Stud Stakes – registered as the Storm Queen Stakes – is a Group 1 race for three-year-old fillies held as part of the exciting Sydney Autumn Racing Carnival. A middle distance event run over 2000m, the Vinery Stud Stakes is run on Tancred Stakes Day at Rosehill Gardens. This elite race meeting conducted by the Australian Turf Club (ATC) also features the Group 1 HE Tancred Stakes (2400m) as well as a host of Group 2 & 3 support races including the Group 2 Tulloch Stakes (2000m) and the Group 2 Emancipation Stakes (1500m).

Trainer Chris Waller celebrated his 121st Group 1 win thanks to a brilliant late victory by Phar Lap Stakes winning filly Hungry Heart who ran down the front-running favourite Harmony Rose to salute in the Vinery Stud Stakes 2021 results ahead of a potential ATC Oaks run.

The latest autumn Vinery Stud Stakes 2021 odds on the three-year-old staying fillies running in the ATC Oaks lead-up will be available below as soon as available at Ladbrokes.com.au.

Each autumn the Vinery Stud Stakes attracts a class line-up of three-year-old fillies displaying the potential to stay longer distances with many eyeing an ATC Oaks run over the mile and a half during ‘The Championships’ in April.

The official 2021 Vinery Stud Stakes field and barrier draw will be released by Racing NSW as of Wednesday March 31, 2021 and listed in full below.

The Vinery Stud Stakes 2021 final field features 10 fillies led in betting by the rails-drawn Harmony Rose coming off a third in the Group 1 Randwick Guineas against the boys.

The Vinery Stud Stakes 2021 nominations are due to close on Monday March 29, 2021 and will be published below as soon as available.

The Vinery Stud Stakes is a relatively young Australian thoroughbred race, first run in 1979 when Impede took out the race in impressive fashion. It began as a principal race run over 1900m but was given Group 2 status and run over 2000m the following year in 1980. In 1992 the Storm Queen Stakes gained its current Group 1 status.

The Vinery Stud Stakes has been won by a number of talented fillies, but in 1989 was taken out by a genuine equine superstar in Research. Research won the Group 1 Flight Stakes (1600m), Group 2 Wakeful Stakes (2000m) and Group 1 VRC Oaks (2500m) during the 1988 Spring Racing Carnival and started her autumn campaign with a win in the Vinery Stud Stakes before capturing both the Group 1 Australian Derby (2400m) and the Group 1 Australian Oaks (2400m) in the space of four days – a feat that has never been repeated.