The The Galaxy is a Group 1 sprint race run over 1100m at Rosehill Gardens on Golden Slipper Day during the Sydney Autumn Racing Carnival. 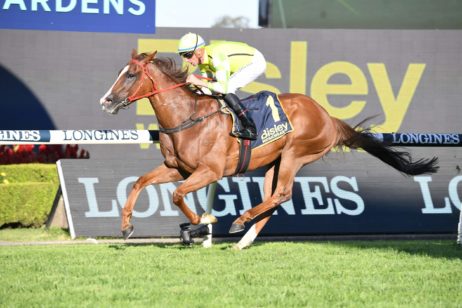 The ATC The Galaxy is a Group 1 sprint race held at Rosehill Gardens Racecourse on Golden Slipper Day in March during the annual Sydney Autumn Racing Carnival.

The Galaxy is the only elite level sprint during the carnival that is run over just 1100 metres and sprinters that are contesting the race normally come through races like the Group 1 Oakleigh Plate (1100m) at Caulfield in Melbourne or the Group 2 Challenge Stakes (1000m) at Royal Randwick. Eduardo (2021) was the last sprinter to do the Challenge Stakes –  The Galaxy double and the first last start winner to salute in the Group 1 since Jetball (1994).

Eduardo would go on to frank The Galaxy form winning a host of subsequent races during 2021 including Brisbane’s Group 1 Doomben 10,000 and the $1 million Winners Stakes that spring on the back of a third in the $15 million The Everest.

The autumn’s latest The Galaxy 2022 racing odds are available below with betting market links to Ladbrokes.com.au.

CLICK HERE FOR THE LATEST ALL-IN 2022 THE GALAXY ODDS

The Galaxy field attracts the season’s best short-distance specialists, many coming off the Group 2 Challenge Stakes (1000m) at Randwick earlier in the autumn, and is released on the Wednesday before Golden Slipper Day.

The official 2022 The Galaxy field is set for release by Racing NSW on Wednesday March 16, 2022 and will be published in full below.

Updated The Galaxy 2022 nominations are due to close on Monday March 14, 2022 and will be released below as soon as available.

The Galaxy has always drawn a competitive field of leading sprinters and has been won by a number of talented gallopers. Bletchingly (1975), Luskin Star (1978), Schllaci (1992), Spark Of Life (2004), Magnus (2007) and Bel Sprinter (2013) are just some of the top sprinters who have their names on The Galaxy honour roll.

The Galaxy was first run in 1972 over a distance of 1200 metres and the race distance was converted to 1100m the following year.  The race was upgraded to a Group 2 event in 1980 and received its status as a Group 1 race before the 1984 edition of the race that was won by Mr Illusion.

The Galaxy has proven a very difficult race to win in back-to-back years and Grey Receiver remains the only horse to have won the race on multiple occasions after taking out the race in 1981 and 1982.

In 2021 the original Golden Slipper Stakes race day including The Galaxy was abandoned due to heavy rainfall and unsafe track conditions and postponed to the following Saturday.