The Danehill Stakes is a Group 2 sprint held down the Flemington straight as an early lead-up into the Group 1 Coolmore Stud Stakes later in the spring. 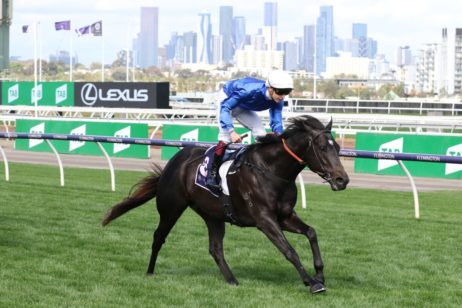 The Group 2 Danehill Stakes is held during Melbourne’s Spring Racing Carnival at the famous Flemington Racecourse down the straight. Run over 1100m, reduced from 1200m in 2021, the race is a set weights plus penalties sprint for three-year-olds.

Worth $300,000 in prize money, the Danehill Stakes is now held on Turnbull Stakes Day with racing headlined by the Group 1 Turnbull Stakes (2000m) and held on the same date as Sydney’s Epsom Handicap Day meeting.

The Danehill Stakes was previously run a fortnight earlier on Makybe Diva Stakes Day before being moved ahead of the 2021 edition to serve as a stepping stone towards the Coolmore Stud Stakes.

Many of the best out of the Danehill Stakes results continue onto the Group 1 Coolmore Stud Stakes (1200m) at the same track and distance on Victoria Derby Day with Sepoy (2011) the last to complete the double.

This season’s edition of the Danehill Stakes 2021 ran on Saturday October 2, 2021 and was won by the Godolphin-raced Kallos at 11/1.

The James Cummings-trained Kallos ($12) was given a gun ride by Fred Kersley to score an upset win in the 2021 Danehill Stakes results down the straight defeating General Beau by two lengths.

Click here to read more on the slick Danehill Stakes 2021 win by the Godolphin-raced Kallos.

The top Flemington racing odds and Danehill Stakes 2021 betting markets courtesy of Ladbrokes.com.au will be provided below the week of the race.

Dalasan ($2.60 in 2019) was the last favourite in Danehill Stakes betting to salute.

The Danehill Stakes field attracts a line-up of the season’s most exciting three-year-old sprinters coming off lead-up races including the Group 3 Quezette Stakes (1100m) for fillies and the Group 3 Vain Stakes (1100m), both held at Caulfield the month before.

The official 2021 Danehill Stakes Final Field & Barrier Draw will be provided below once released on the Wednesday leading-up to Turnbull Stakes Day.

Each Melbourne Spring Racing Carnival the Danehill Stakes nominations close on the Monday of race week and will be published below.

The first recorded Danehill Stakes took place in 1982 when Fiesta Star won the Group 3 event. Changed to a Group 2 race in 2009, the sprint event has also been known as the Black Douglas, Hilton on the Park, Chivas Regal and L’Oreal Plate. The fastest recorded winning time (since 1988) was by 1 minute 8.1 seconds by Rich Enuff in 2014.

The 2011 Danehill Stakes winner Sepoy went on to win that year’s Coolmore Stud Stakes during the Melbourne Cup Carnival.

The last filly to beat home the boys in the Danehill Stakes results was Catchy (2017) who also won the previous season’s Blue Diamond Stakes.