The Flight Stakes is a 1600m mile event held at Royal Randwick Racecourse on Epsom Handicap Day in Sydney. 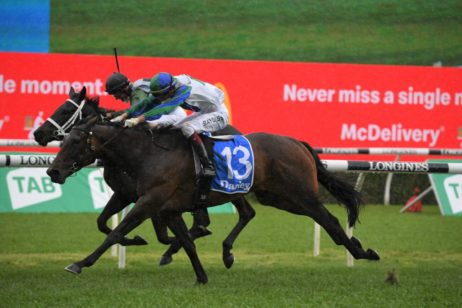 The Flight Stakes is a 1600m set weights race held at Randwick Racecourse on Epsom Handicap Day in late September or early October each Sydney Spring Racing Carnival. Hosted by the Australian Turf Club (ATC), the Group 1 race attracts the best three-year-old fillies from around the country to compete for the $750,000 prize money.

The Flight Stakes shares a race program with the Group 1 Epsom Handicap (1600m) and Group 1 The Metropolitan (2400m) making it one of the biggest Sydney race days over the spring, on part of a massive weekend of racing that also sees Melbourne host Turnbull Stakes Day.

The best fillies out of the Flight Stakes will take on the boys next-up in the Group 1 Spring Champion Stakes (2000m), a rare double achieved in 2020 by the history-making Montefilia.

As of 2021, the Flight Stakes also now serves as a potential lead-up for fillies invited to contest the $2 million The Invitation (1400m) back at Randwick on Bondi Stakes Day.

In 2021 trainer Gai Waterhouse celebrated her 10th Flight Stakes win and second in partnership with Adrian Bott thanks to an upset by Never Been Kissed ($41).

Co-trainer Gai Waterhouse took her incredible record in the Flight Stakes 2021 results up to 10 victories thanks to a tough upset by Never Been Kissed at 40/1.

Click here to read more on the shock Flight Stakes 2021 winner Never Been Kissed who could head to the Thousand Guineas in Melbourne next.

See below for the official Flight Stakes 2021 Results & Finishing Order once the three-years-old fillies’ classic is run and won on Epsom Day, Saturday October 2, 2021.

The full Flight Stakes betting markets and updated Flight Stakes odds on the hopeful three-year-old fillies in the Epsom Handicap Day Group 1 are detailed below complete with links to Ladbrokes.com.au for you to back your Flight Stakes tips.

Funstar ($1.75 in 2019) was the last favourite in Flight Stakes betting to salute for the punters.

Following a run in the Flight Stakes field there are a host of other potential Group 1 races for the fillies to target including a run against the boys in the Group 1 Caulfield Guineas (1600m), which the 2018 Flight Stakes winner Oohood ran third behind The Autumn Sun in.

The 2021 Flight Stakes field and barrier draw are released on Wednesday of race week and will be provided in full below as soon as final acceptances for the mile feature are released by Racing NSW.

Sixteen talented fillies do battle in the Flight Stakes 2021 field including the Rob Heathcote-trained late entry Startantes who is on the quick back-up off her Golden Rose sixth last weekend.

Click here to read more on the key chances in the 2021 Flight Stakes field and betting markets.

The 2021 Flight Stakes nominations are released by Racing NSW on the Monday leading up to Epsom Handicap Day.

The Flight Stakes was named after the champion mare Flight, which won the Cox Plate in 1945 and 1946. One year later, the first Flight Stakes race was won by Nizam’s Ring. From 1947 to 1978, the event was a principal race however it then elevated to Group 2 status until 1984.

Gai Waterhouse has trained more Flight Stakes winners than any other trainer preparing her record ninth champion in 2016 with the success of that year’s subsequent Thousand Guineas champion Global Glamour and then 10th in 2021 with shock winner Never Been Kissed at 40/1.

Flight Stakes results and winning times since 2000 are listed below.