The Turnbull Stakes runs at Flemington Racecourse as a lead-up to other Melbourne Group 1 spring races including the Caulfield Cup. 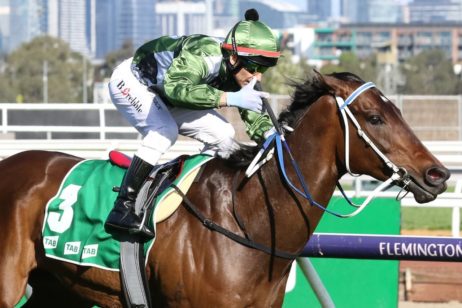 The Turnbull Stakes is a Group 1 race for staying types held in early October at Flemington Racecourse.

The Turnbull Stakes currently runs on the same Saturday as the Epsom Handicap at Randwick in Sydney. Offering $1,000,000 in prize money as of 2021, the event is the marquee race at the meeting.

The Turnbull Stakes is for four-year-old entries and up run under set weight conditions plus penalties. This 2000m middle-distance event always attracts an elite field of highly competitive runners, many of which use the race as a key lead-up to the carnival’s feature races including the Caulfield and Melbourne Cups.

Since being awarded Group 1 status however, the Turnbull Stakes is now seen as a premier race in its own right and not simply a preparatory race. As the first quality middle-distance race at the carnival, the Turnbull Stakes provides stayers with a chance to run over the more suitable 2000m building up to the longer 2400m and 3200m races later in the spring.

Trainer Chris Waller made it four wins on the trot in the Turnbull Stakes results with Kings Will Dream saluting in 2019 followed by Verry Elleegant in 2020.

The 2021 Turnbull Stakes ran on Saturday October 2, 2021 and was won by the Peter Moody-trained Incentivise.

The Peter Moody-trained Queensland expat Incentivise ($2.70) continued towards the Spring Cups digging deep to hold off the improved Young Werther ($26) and salute in the 2021 Turnbull Stakes results.

Click here to read more on the gutsy Turnbull Stakes 2021 win by Incentivise.

The Turnbull Stakes 2021 betting markets and updated odds from Ladbrokes.com.au will be available below as soon as released.

The Turnbull Stakes field attracts a quality line-up of spring gallopers each year coming via a host of different lead-up races including the Group 1 Underwood Stakes (1800m) run the Sunday prior at Caulfield.

Plenty of runners come into the Turnbull Stakes field off a Sydney campaign and in 2015 and 2016 both champions of the Flemington Group 1 won the Group 2 Hill Stakes at Randwick in the lead-up with Preferment and Hartnell respectively doing the double.

Four-time Cox Plate hero won the 2017 and 2018 editions of the Turnbull Stakes on the back of her back-to-back Group 1 George Main Stakes victories in Sydney.

The official Turnbull Stakes 2021 Final Field & Barriers will be announced on the Wednesday of race week and published in full below.

Click here to read more on the key horses in the Turnbull Stakes 2021 field and betting markets.

Peter Moody’s Spring Cups’ favourite Incentivise is the headline entry in the 2021 Turnbull Stakes nominations in Melbourne this weekend.

Named in honour of the incumbent VRC Chairman Mr. Richard Turnbull, the Turnbull Stakes was first run in 1948 when Beau Gem claimed victory. It was originally a 12 furlong (approx. 2400m) Principal race up until 1972 when the distance was changed to the shorter length of 2000m with Australia’s adoption of the metric system. The race was run as a handicap event through until 1963 when weight-for-age conditions were adopted until 1970 when eventually the Turnbull Stakes became a set weights plus penalties race. In 1979 the event was elevated to Group 2 status and remained the same until 2006 when it was installed as a Group 1 event following the win of the infamous Makybe Diva in 2005.

To most famous recent Turnbull Stakes winner was Winx who won her Flemington debut in the race in 2017 by six and a half lengths and then successfully defended her Turnbull Stakes title in 2018.