The Australian Derby is also known as the ATC Derby and takes place over 2400m at Royal Randwick on Day 1 of The Championships in April during the Sydney Autumn Racing Carnival. 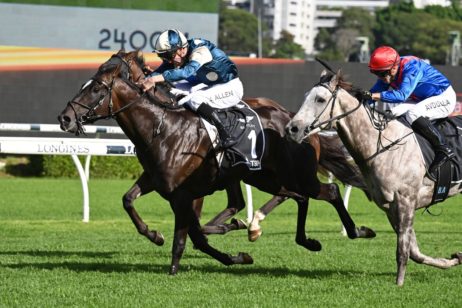 The Australian Derby is a classic Group 1 race for three-year-olds. Held on the first Saturday in April* during the Sydney Autumn Racing Carnival, the race takes place at Royal Randwick Racecourse on Day 1 of ‘The Championships’. This is a classic Derby, raced over a distance of 2400 metres (a mile and a half) and offers $2 million in total prize money.

*In 2021 the Australian Derby ran on the second Saturday of April with all race meetings of the autumn in Sydney from Slipper Day onwards postponed a week due to the weather.

The Australian Derby prizemoney for 2020 was reduced to $1 million to help cope with the financial stress on the industry brought on by the COVID-19 pandemic, but was back to $2 million in 2021.

As a set weights race, colts and geldings must carry 56.5kg and fillies must carry 54.5kg. The ATC Australian Derby is regarded as a prestigious event and attracts some of the greatest emerging stayers from around the country.

Following a run in the ATC Derby some of the better young stayers may head to Adelaide in May for the Group 1 South Australian Derby (2500m) with Explosive Jack (2021) the last to do the interstate Derby double.

The 2022 Australia Derby ran on Saturday April 2, 2022 and saw the Ciaron Maher & David Eustace-trained Hitotsu ($3.30F) make history winning the event fresh off his Australian Guineas victory over a mile in Melbourne.

The Rosehill Guineas – Australian Derby double has recently been achieved by the likes of It’s A Dundeel (2013) and Criterion (2014).

The Ciaron Maher & David Eustace-trained Hitotsu ($3.30F) became the first horse since Mahogany (1993-94) to complete the VRC Derby – Australian Derby double, the last start Australian Guineas winner over a mile fighting off the challenges and overcoming interference on the straight to salute for the punters.

Click here to read more by the gutsy win for the punters by Hitotsu in the 2022 ATC Derby results.

Over the autumn the all-in and final field Australian Derby 2022 betting odds courtesy of Ladbrokes.com.au complete with market links to the Group 1 staying clash will be available below.

Stay tuned for our insider Australian Derby 2022 tips and best bets to be published below during race week.

The last three-year-old to do the Victoria Derby/Australian Derby double was Mahogony (1994) so it takes a pretty good horse to do it. This is a pretty good horse right here. He looked in top form fresh in the Guineas over the mile at headquarters and has been set for this mile and a half feature. He has the class to win and comes via the same formula they adopted in the spring. The only queries are Randwick in the wet. History is there to be made, but the weather gods might just have a say yet. EACH WAY.

Was value earlier in the week but Regal Lion has been absolutely smashed and is into $5.50 second favouritism. This Kiwi raider was good at home across the Tasman on March 5 when two lengths third in the NZ Derby over this distance as a 40/1 shot. That was on a Good track. He debuted down under on Monday in the rescheduled Tulloch Stakes over 1850m at Newcastle and was eye-catching, flashing late to cross a length back second to Character. He’s on the quick back-up and will relish the mile and a half. Again, that really Heavy track is a query. He has never been on anything worse than Soft but is from the right stable with co-trainer Murray Baker chasing his sixth Australian Derby victory. BACK DON’T SACK.

Value to be had outside the dominant hopes and War Eternal looks a horse forgotten in this year’s ATC Derby. Bjorn Baker’s nicely-bred Pierro colt has wet track form and is the progressive runner in the mix. Improving each run and form around Converge / Anamoe when fourth in the Randwick Guineas on a Heavy (9) two back. Those are good horses. Comes via a third in Moonee Valley’s Group 2 Alister Clark Stakes (2040m) and will appreciate a wet track in Sydney. Hasn’t won over further than 1400m though so the distance is the question. If he runs it out, he can surprise a few of these. PLACE CHANCE.

The Australian Derby field attracts a line-up of the season’s best three-year-old stayers. The majority of the horses that run in the ATC Derby field are colts and geldings, with the fillies generally running the following weekend in the Group 1 Australian Oaks (2400m) against their own kind.

The official 2022 Australian Derby field and barriers are set to be released by Racing NSW on Tuesday March 29, 2021 and will be published in full below.

Click here to read more on the key runners in the 2022 Australian Derby field and betting markets.

About a month out from the race the Australian Derby first acceptances are taken by Racing NSW narrowing down the list of potential young stayers set to contest the Doncaster Mile Day showdown.

Like all of the Group 1 races run at Randwick Racecourse on Doncaster Mile Day, the Australian Derby nominations close in early February around two months before the race takes place and often attract over 100 early entries.

The 2022 Australian Derby nominations close at midday on Tuesday the 8th of February, 2022.

With names such as Phar Lap, Tulloch and Kingstown Town included in the list of race winners, it’s little wonder why this race is so highly regarded in the industry. First won by Kyogle in 1861, the event was titled the Randwick Derby Stakes. In 1865, it was changed to the Australian Derby Stakes and in 1994 it was given its current name.

The Derby was originally run over 1 1/2 miles however was changed in 1972 to 2400m to conform to the metric system. Between 1932 and 1956 geldings were banned from competing in the race.

The 2020 Australian Derby results saw Quick Thinker become the fourth horse in as many years to do the Tulloch Stakes – ATC Derby double. The Kiwi also handed co-trainer Murray Baker with his fifth win in the classic.

See below for the full Australian Derby results going back to 2000.