The Thousand Guineas is a Group 1 mile race for three-year-old fillies run on the Wednesday after the $2 million Caulfield Guineas in mid-October each spring. 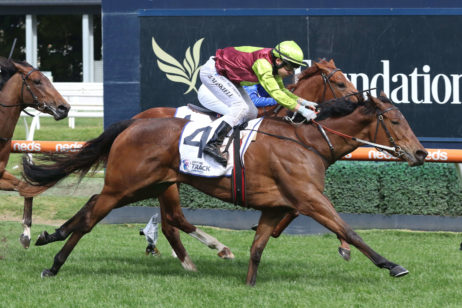 The Thousand Guineas is one of the premier races for fillies held during the annual Melbourne Spring Racing Carnival. Run on a Wednesday in early – mid October following on from Caulfield Guineas Day on the Saturday prior, the Group 1 Thousand Guineas is a middle distance event run over 1600m by three-year-old fillies at set weights. Worth $1 million in total prize money after doubling its stakes in 2019, it is the fillies’ equivalent to the Caulfield Guineas for colts and geldings held a few days earlier.

More and more Sydney’s Group 1 Flight Stakes (1600m) is also serving as a lead-up into the Thousand Guineas field with Guelph (2013) and Global Glamour (2016) both recently completing the double.

The 2021 Thousand Guineas takes place on Wednesday October 13, 2021 at Caulfield Racecourse in Melbourne.

The latest Thousand Guineas 2021 betting odds on the three-year-old fillies in the mix for the clash will be found below, fixed win pricing provided by Ladbrokes.com.au, as soon as markets on the $1 million feature are out.

The favourites were back on top in the 2019 Thousand Guineas results with Flit ($2.35) saluting for the punters.

Fillies that ran well in lead-up races in Melbourne like the Edward Manifold Stakes and Thousand Guineas Prelude usually sit top of the Thousand Guineas odds at bookmakers like Ladbrokes.com.au each spring.

Runners in the Thousand Guineas can follow the race with a run in the Group 2 Wakeful Stakes (2000m) on Derby Day and then the top prize, the Group 1 VRC Oaks (2500m) at Flemington on the first Thursday of November. Many dominant fillies have seen success in all three events over the years. It is a good idea when betting on these later carnival races to watch out for the winners and placegetters in the Thousand Guineas.

From 2006 – 2016 the favourites in Thousand Guineas betting saluted for the punters six times, most recently with Global Glamour (2016), so tipping the best in betting has had nearly a 50% strike rate of paying out in the past decade.

The Thousand Guineas favourite was back in form in 2019 with the win by Godolphin-raced Flit.

The 2021 Thousand Guineas Second Acceptances are announced in late September and will be available below.

The official Thousand Guineas 2021 First Acceptances close in early September and the list of entries will be published here.

The original 2021 Thousand Guineas nominations are taken by Racing Victoria in early August attracting around 200 young fillies eyeing an October run in the Group 1. Thousand Guineas nominations are followed by first and second acceptances taken in the second and fourth weeks of September, narrowing down the list of potential runners in the mile feature.

The Thousand Guineas results and winners since 2000 are listed below.