The Percy Sykes Stakes is a lucrative Group 2 sprint for two-year-old fillies run on Day 2 of The Championships at Royal Randwick in April. 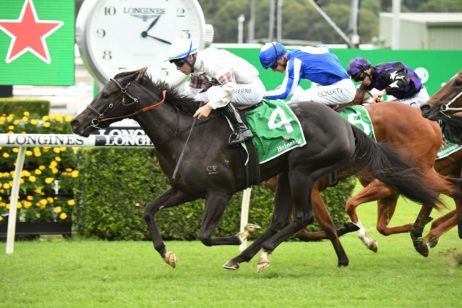 The Percy Sykes Stakes – formerly the Keith Mackay Handicap – is a lucrative Group 2 race for two-year-old fillies run on Day 2 of Sydney’s ‘The Championships’ on the second Saturday of April* annually.

*In 2021 the Percy Sykes Stakes will run on the third Saturday of April with all race meetings of the autumn in Sydney from Slipper Day onwards postponed a week due to the weather.

Contested over 1200m at Royal Randwick Racecourse the Percy Sykes Stakes is run under set weights plus penalties and is now worth $1 million in total prize money and was upgraded to Group 2 status for the first time in 2017.

Away Game (2020) was the last Golden Slipper graduate (2nd) to win the Percy Sykes Stakes next race.

Tommy Berry produced a patient and well-timed ride on returning Magic Night runner-up Jamaea ($17) to score an upset win in the 2021 Percy Sykes Stakes results over Crystal Bound ($3), while Joyous Legend ($31) added further value to the trifecta out wide in third.

Click here to read more on the late win by Jamaea in the Percy Sykes Stakes 2021 results.

The latest favourite in Percy Sykes Stakes betting to salute for the punters was Away Game ($3.20 in 2020).

The official 2021 Percy Sykes Stakes First Acceptances are taken in mid-March along with all the other The Championships races narrowing down the list of potential runners in the lucrative Group 2 race.

The 2021 Percy Sykes Stakes first acceptances closed at midday on March 9, 2021 leaving 82 fillies including the undefeated Four Moves Ahead who races next-up in the rescheduled Golden Slipper.

Early nominations for the Percy Sykes Stakes in 2021 close on a Tuesday in early February and usually attract over 200 juveniles.

The 2021 Percy Sykes Stakes nominations attracted 210 young fillies led in early betting by the Chairman’s Stakes winner Enthaar who next takes on the boys in the Group 1 Blue Diamond Stakes on February 20.

For one year in 2014 the race was known as the Royal Randwick Stakes and added to the ATC Championships series of races enjoying a notable boost in prize money. The current race name – Percy Sykes Stakes – is in honour of esteemed veterinarian Percy Sykes who passed away in 2014. He is best known for his work with legendary trainers including Bart Cummings, Gai Waterhouse and her father TJ Smith – whom the TJ Smith Stakes is named after.

During the early stages of Percy Sykes Stakes history the race didn’t hold a huge amount of prestige and attracted a mediocre class of fillies. As it increased in status and prize money the Percy Sykes Stakes winners have also improved with notable champions of the event including Streama (2011), Eloping (2014), Missrock (2016), Shoals (2017) who went on to defeat the older mares during Melbourne Cup Carnival in the Group 1 Myer Classic (1600m) and the brilliant Away Game (2020).

See below for the list of Percy Sykes Stakes winners and placegetters going back to 2000.