The Golden Rose Stakes is the first Group 1 race of the Sydney Spring Racing Carnival worth $1 million prize money and open only to three-year-old horses. 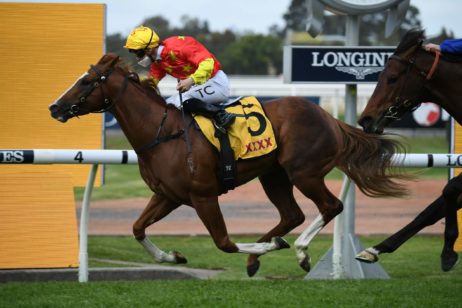 The Golden Rose Stakes is a 1400m sprint race held at Rosehill Racecourse in September each season. The $1 million race is one of the richest events in the Sydney Spring Racing Carnival for three-year-olds and attracts a great group of youngsters every year. As a set weights race, colts and geldings are required to carry 55.5kg and fillies must carry 53.5kg.

The Golden Rose is the third Group 1 race of the season in Sydney – following the recently upgraded Group 1 Winx Stakes (1400m) and Group 1 George Main Stakes (1600m) at Royal Randwick  – and takes place on the same day as the Group 2 Golden Pendant (1400m). Three-year-olds traditionally come into the Golden Rose Stakes via a lead-up run in the Group 2 Run To The Rose (1200m) contested at the Rosehill track a fortnight prior.

All five Golden Rose winners from 2012 – 2016 came off a Run To The Rose start including Hallowed Crown (2014), Exosphere (2015) and Astern (2016) all completing the double. In 2017 upset Golden Rose winner Trapeze Artist upset the form winning on the back of a lead-up fourth in the Group 2 Stan Fox Stakes (1500m). The Stan Fox Stakes also produced the 2018 Golden Rose winner, The Autumn Sun, who improved on a lead-up third and who would go onto win that year’s Group 1 Caulfield Guineas (1600m) in Melbourne next start.

Bivouac (2019) became the latest horse to do the Run To The Rose – Golden Rose double handing jockey Hugh Bowman with his fifth winning ride in the race and connections Godolphin their sixth.

In 2020 the Golden Rose winner Ole Kirk improved on a lead-up second in the Run To The Rose and went on to further frank the form winning Melbourne’s Group 1 Caulfield Guineas (1600m) at his next start.

The next year in 2021 In The Congo also won the Golden Rose Stakes on the back of a Run To The Rose second turning the tables on Anamoe.

The Golden Rose is also part of the “Golden Slam” series of races that starts with the two-year-olds in the Golden Slipper Stakes and ends with the $7.5 million The Golden Eagle for four-year-olds.

Many Golden Rose horses may had to Randwick a month later to contest the $1 million Bondi Stakes (1600m), a race won in 2020 by Golden Rose fifth place-getter Peltzer.

The form of the 2021 Golden Rose Stakes was franked with the runner-up Anamoe winning the Caulfield Cup next start before a brave second in the Group 1 $5 million Ladbrokes Cox Plate (2040m).

The season’s latest Golden Rose 2022 betting odds and market links to Ladbrokes.com.au on the early Sydney Spring Racing Carnival Group 1 race will be available below as soon as released.

Bivouac ($2.50 in 2019) is the last favourite in Golden Rose Stakes betting to salute for the punters.

The Golden Rose Stakes field attracts the season’s top middle-distance three-year-olds, many of which would have contested the Blue Diamond Stakes and or Golden Slipper Stakes as two-year-olds in the autumn. The Run To The Rose is the key lead-up into the Golden Rose field each year.

The official Golden Rose Stakes 2022 Final Field & Barriers are set for release at 9:00am on the Tuesday of race week and will be published in full below once announced by Racing NSW.

First acceptances for the Golden Rose Stakes 2021 close at 3:00pm (AEST) on Tuesday the 14th of July, 2022 further reducing the number of potential runners in the million-dollar showdown.

The Golden Rose Stakes was first run in 1978 as the Peter Pan Stakes and the inaugural edition of the classic was won by Kapalaran. A year later, subsequent triple Cox Plate champion Kingston Town (1979) took out the race. The event was renamed as the Golden Rose Stakes in 2003 and gained its current Group 1 status in 2009 when Denman won. Notable recent Golden Rose winners include Toorak Toff (2010), Exosphere (2015) and Astern (2016).

The 2018 Golden Rose winner The Autumn Sun went on to win his next four races including a trio of Group 1 victories in the 2018 Caulfield Guineas, 2019 Randwick Guineas and 2019 Rosehill Guineas.

In 2019 Bivouac won the Golden Rose before his Group 1 Newmarket Handicap success the following year at Flemington. He defeated Yes Yes Yes in the Golden Rose, the Chris Waller-trained runner-up franking the form by winning the world’s richest turf race – the $14 million The Everest – next start.