The Group 1 Queen Elizabeth Stakes is the richest feature race held on the Day 2 of The Championships at Royal Randwick in Sydney. 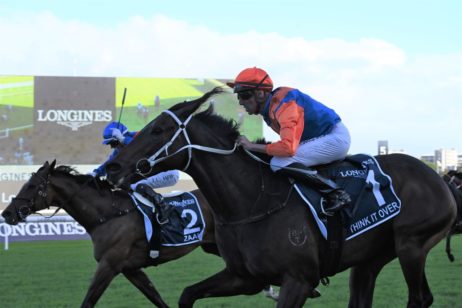 The Queen Elizabeth Stakes is held on Day 2 of ‘The Championships’ during the prestigious Sydney Autumn Racing Carnival at the state’s premier track, Royal Randwick, on the second Saturday of April*.

*In 2021 the Queen Elizabeth Stakes ran on the third Saturday of April with all race meetings of the autumn in Sydney from Slipper Day onwards postponed a week due to the weather.

The Group 1 Queen Elizabeth Stakes is run at weight-for-age conditions over 2000 metres and, after receiving a substantial prizemoney increase in 2013, is now worth a staggering $4 million in prize money.

For the 2020 running of the Queen Elizabeth Stakes the prize money was cut to $2 million due to the COVID-19 pandemic but was boosted back to $4 million in 2021.

The Group 1 event generally draws the best weight-for-age horses from right around Australia as well as international raiders set to make the trip in coming years. That came to fruition in 2020 with the William Haggas-trained UK raider Addeybb becoming the first Queen Elizabeth Stakes winner in the post-Winx era.

In 2021 Addeybb successfully defended his title going back-to-back with the Waller-trained Verry Elleegant – subsequent 2021 Melbourne Cup champion – second in both 2020 and 2021.

Verry Elleegant was favourite in the 2022 Queen Elizabeth Stakes, but only managed to run a disappointing fifth behind upset winner Think It Over.

The Kerry Parker-trained Think It Over ($41) was back in winning form despite facing a stellar field an unsuitable Heavy (10) track when scoring a huge upset in the Queen Elizabeth Stakes 2022 results over Zaaki thanks to a gutsy move by jockey Nash Rawiller who went to the far outside rail at the top of the straight to power home.

Click here to read more on the spectacular 2022 Queen Elizabeth Stakes win by Think It Over.

The Group 1 Ranvet Stakes (2000m) and Group 1 Tancred Stakes (2400m) are generally considered the best Queen Elizabeth form lead-up races, but in recent years the winners of the Group 1 event have come from a wide variety of races.

The Group 1 George Ryder Stakes (1500m) and Group 1 Doncaster Mile (1600m) have both developed into key lead-up races, the latter most recently producing the mighty Winx (2017-19) who did the double three years running.

The 2021 Queen Elizabeth Stakes form was franked with the runner-up Verry Elleegant going on to win the $8 million Melbourne Cup over two miles at Flemington that November.

Early 2022 Queen Elizabeth Stakes odds offered under all-in conditions are open at bookmakers weeks out from the race when the nominations are taken by Racing NSW.

There was a huge upset in 2022 with Think It Over winning the race at $41 in Queen Elizabeth Stakes betting.

Everything is coming up the Queen with the mud track and continued showers working in favour of Verry Elleegant. She could very well be racing in Australia for the last time on Saturday so a big win in the wet here would be fitting. She’s fourth-up and fit looking to go one better than her back-to-back seconds behind Addeybb in this race the past two years. Is the gun mud-lark in this field with an impressive Heavy track record (5:3-2-0) and loves this track. Winner of the Group 1 Chipping Norton over the mile here two back with the same conditions, before Montefilia beat her home in a two-length upset at Rosehill last time out. Returning to the Royal, she’ll be peaking and ready to produce something special attempting her incredible 12th Group 1 victory. EACH WAY.

Originally it was All-Star Mile winner Zaaki we had on top, but with the Randwick conditions deteriorating late in the week, we’ve steered towards the gun three-year-old who we know handles the mud. He was beaten by Converge two back at a mile in the Randwick Guineas, but more than atoned with that jaw-dropping seven-length romp home in the Rosehill Guineas over this distance. Three-year-olds don’t have a great record in the Queen Elizabeth, but this Street Boss colt is no ordinary three-year-old. He’s a star and think he can further prove that against the big guns on Saturday. WINS.

It’s a star-studded field, but for value, I’m Thunderstruck has been knocking on the door this prep and could surprise a few presenting rock-hard fit. Last year’s Golden Eagle winner is proven in the conditions and was solid enough when second to Zaak in The All-Star. That form was well and truly franked with last Saturday’s Doncaster trifecta all coming out of the Melbourne feature, including I’m Thunderstruck who was runner-up by a narrow margin. He is up in the weights here and yet to prove himself at the 2000m, but is racing well enough to challenge a few. PLACE CHANCE.

The Queen Elizabeth Stakes Field is released on the Tuesday before the race.

The 2022 Queen Elizabeth Stakes Final Field & Barriers will be released on Tuesday April 5, 2022 and will be published in full below.

Click here to read more on the key horses in the 2022 Queen Elizabeth Stakes field and betting markets.

The Queen Elizabeth Stakes first acceptances close a month before the race takes place on the second Saturday in April and narrow down the list of Group 1 gallopers heading into the feature Randwick race.

The Queen Elizabeth Stakes nominations close two months out from the race in early February each autumn and attract up to 100 weight-for-age hopefuls after a share in the season’s richest race.

The recent record of favourites in Queen Elizabeth Stakes betting was boosted by the trio of wins by odds-on fancy, equine superstar Winx (2017-19) followed by that of European raider Addeybb in 2020. Addeybb jumped the second favourite in 2021 when going back-to-back in the event.