The Sydney Cup is a Group 1 race run at Royal Randwick over two miles (3200m) on a Saturday in early April on Day 2 of 'The Championships. 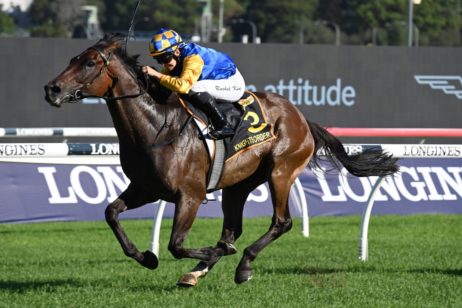 The Group 1 Sydney Cup is held on the final race day of the esteemed ‘The Championships’ during the Sydney Autumn Racing Carnival. Day 2 of ‘The Championships’ – also known as Queen Elizabeth Stakes Day – is one of the most exciting and valuable race days on the Australian racing calendar.

Held on the second Saturday of April* the meeting is headined by four Group 1 races including the richest race on the card – the Group 1 $4 million Queen Elizabeth Stakes (2000m). The other elite level features along with it and the Sydney Cup are the Group 1 ATC Oaks (2400m) for the three-year-old fillies and the Group 1 Queen Of The Turf Stakes (1600m) for fillies and mares.

*In 2021 the Sydney Cup was run on the third Saturday of April with all race meetings of the autumn in Sydney from Slipper Day onwards postponed a week due to the weather.

The Sydney Cup is one of only a few Australian races run over the traditional cup distance of 3200m, the same as Australia’s most illustrious race the Melbourne Cup. This open handicap event is worth a very lucrative $2,000,000 and generally features some of the leading stayers in Australia.

All of The Championships’ races for 2020 had reduced prizemoney due to the COVID-19 pandemic including the Sydney Cup offering $1 million before being boosted back up to $2 million in 2021.

As the premier staying event during the Sydney Autumn Carnival, the Sydney Cup field attracts a high quality field of gallopers each year and notable winners include the three time Melbourne Cup winning mare Makybe Diva (2004), Tie The Knot (1998 & 1999) and Count Chivas (1996).

The Gai Waterhouse & Adrian Bott-trained Knights Order ($8.50) relished the Heavy (10) Randwick track and step back up to two miles leading all-the-way off a confident Rachel King ride to dominate the 2022 Sydney Cup results.

Sydney Cup betting is notoriously difficult and, just like the Melbourne Cup, is always a very open race.

Good Sydney Cup betting tips include looking for horses that ran top four in their lead-up runs and graduates out of the previous weekend’s Chairman’s Handicap at the Randwick track.

The 2022 Sydney Cup odds will be listed below as released by Ladbrokes.com.au in the lead-up to the two mile classic.

Stay tuned for our insider Sydney Cup 2022 Form Guide & Betting Preview for all the race facts and stats to guide your selections on the two mile classic.

Each year the Sydney Cup field attracts the autumn’s top-class stayers many of which have had previous experience over the two miles either via an earlier year’s Sydney Cup or even the iconic Melbourne Cup run at Flemington on the first Tuesday of November.

The Sydney Cup 2022 field will be released Tuesday before the race and published in full below.

Click here to read more on the key stayers in the 2022 Sydney Cup field and betting markets.

After nominations close in February the Sydney Cup first acceptances are taken four weeks out from the race on a Tuesday in early March, narrowing down the list of horses heading towards the $2 million classic.

The Sydney Cup nominations are first taken by Racing NSW on a Tuesday in early-mid February about two months out from the race and can attract up to 100 stayers.

The 2022 Sydney Cup nominations will close on Tuesday the 8th of February, 2022.

The Sydney Cup was first run in 1862 as a Principal race over 16 furlongs, and Talleyrand won the inaugural race. The distance and conditions of the Sydney Cup remained the same for over a century until Australia’s adoption of the metric system caused the length to be converted to 3200m in 1973. In 1980 the Sydney Cup was elevated to Group 1 status.

In 2017 the Sydney Cup was run on April 8, but declared a No Race after the fall of Almoonqith. It ran for a second time a fortnight later with the same horse, UK raider Polarisation, first past the post again.

In 2018 Who Shot Thebarman made history winning the Sydney Cup as a nine-year-old at his fifth attempt in the two mile classic.