The Golden Eagle race is a Special Conditions feature for four-year-old horses offering $7.5 million in prize money and run at Rosehill in October. 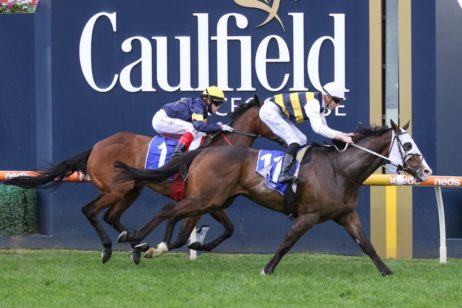 The Golden Eagle is one of the recent additions to the Sydney Spring Racing Calendar, the Special Conditions feature held on the Saturday prior to Victoria’s Melbourne Cup at Rosehill Gardens in either late October or early November each October.

Contested for the first time in 2019, The Golden Eagle race is open only to four-year-old horses and is the most lucrative of its kind offering $7.5 million in prize money.

Taking place in Sydney on the same day Melbourne hosts the time-honoured Victoria Derby, The Golden Eagle is a set weights event that is now a hugely popular target for the middle-distance four-year-olds from around the country.

The 1500m showdown is part of the “Golden Slam” series of races that begins with the two-year-olds in the Golden Slipper and also includes the Golden Rose for three-year-olds.

Horses may come via a range of different top-level lead-up races into The Golden Eagle including the Group 1 Epsom Handicap (1600m) run at Randwick in early October. Inaugural The Golden Eagle winner Kolding became the first horse in history to complete the Epsom – Golden Eagle double in 2019.

The following year the 2020 The Golden Eagle winner Colette also came via the same lead-up improving on her sixth in the Epsom Handicap.

Looking to rival the Melbourne racing action down south on the same day, The Golden Eagle Day also features the $1 million Winners Stakes (1300m) – known in 2019 as the Redzel Stakes, 2020 as the Yes Yes Yes Stakes and 2021 as the Classique Legend Stakes in honour of the respective The Everest winning horses – and the $500,000 Rosehill Gold Cup (2000m).

The 2021 The Golden Eagle takes place at Rosehill Gardens on Saturday October 30th, 2021.

The Golden Eagle 2021 betting odds and links to the latest prices at Ladbrokes.com.au will be available below as soon as all-in markets on the event open.

To date no The Golden Eagle favourite has saluted for the punters.

The confirmed The Golden Eagle 2021 field of four-year-olds will be detailed below as soon as available.

The Golden Eagle was first run in 2019 and won by the classy Chris Waller-trained Kolding who came off a lead-up Epsom Handicap win. Kolding would go on to win the following year’s George Main Stakes (2020) as well as the All Aged Stakes in 2021.

In its second running, the Godolphin-raced mare Colette won The Golden Eagle in 2020 when the race took place on a Heavy (9) track.

Past The Golden Eagle Winners

Previous The Golden Eagle winners going back to the race’s inauguration in 2019 are detailed below.