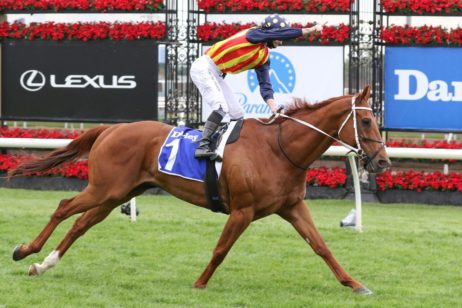 The Champions Sprint, previously called the Darley Sprint Classic, VRC Sprint Classic and formerly the Patinack Farm Classic due to sponsorship, is a 1200m sprint race run down the famous Flemington straight during the spring.

Held on the first Saturday of November on the final day of the Melbourne Cup Carnival, the Champions Sprint is the premier sprint race of the Melbourne Spring Racing Carnival and is currently worth $3,000,000 in prize money as of 2022.

The race, held on VRC Champions Stakes Day – formerly known as Mackinnon Stakes Day – is now the perfect target race for horses out of the world’s richest turf race – the $15 million The Everest (1200m) in Sydney the month before.

For a firth time in as many years The Everest produced the VRC Sprint Classic winner in 2021 with Nature Strip completing the double.

Nature Strip further franked the form returning in the autumn of 2022 to again win the TJ Smith Stakes in Sydney before heading to Royal Ascot in the UK for his international Group 1 King’s Stand Stakes (1200m) victory.

The 2022 VRC Sprint Classic runs on Saturday November 5, 2022 as the Champions Sprint at Flemington offering $3 million in stakes for the first time.

The 2022 Champions Sprint field will be released by Racing Victoria on the Wednesday of Melbourne Cup week 2022 and will be published below along with the official Champions Sprint Barrier Draw as soon as announced.

Horses may come into the Champions Sprint field via a number of different early Melbourne Spring Racing Carnival sprint races, but the Group 1 Manikato Stakes (1200m) has proven the key lead-up race with Buffering (2013) the last horse to complete the double.

In 2021 Nature Strip won the race for a second time and joined Redzel in completing The Everest – VRC Sprint Classic double.

The Champions Sprint nominations are taken the Monday of race week and feature a star-studded list of spring sprinters, including many that ran well in the previous season’s Champions Sprint / VRC Sprint Classic Classic results. Races.com.au will publish the official 2022 Champions Sprint Nominations as soon as early entries are announced by Racing Victoria.

A number of horses have won the race multiple times including the undefeated mare Black Caviar (2010-11) and Chris Waller’s ace sprinter Nature Strip (2019, 2021) who also won the 2021 The Everest in the lead-up that spring.

The event was renamed ahead of the 2022 edition as the Champions Sprint.