The Salinger Stakes (1200m) is a Group 2 race held at Flemington Racecourse on Victoria Derby Day officially known as the Linlithgow Stakes. 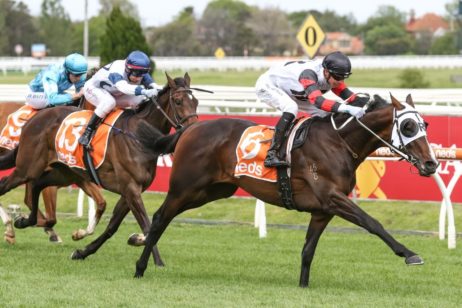 The Group 2 2021 Salinger Stakes, also known as the Linlithgow Stakes, is an open handicap event featured during the Melbourne Spring Racing Carnival. Held at Flemington Racecourse on Victoria Derby Day, the Salinger Stakes is a 1200m sprint worth $300,000 in prize money.

Since the introduction of Sydney’s $15 million The Everest, a number of horses in the Salinger Stakes field now come off a run in that event – the world’s richest turf race. The 2018  Salinger Stakes winner Osborne Bulls came off a third in The Everest and went on to run second in his next five starts all in Group 1 company.

The 2021 Salinger Stakes field and barriers are announced on the Wednesday of race week and will be published in full below.

First won by Karina in 1960, the Salinger Stakes has been known by many different names including the Craven A Plate, Pure-Pak Stakes, Gasden Rheem Stakes, Southcorp Stakes and Yellowglen Stakes. In 2007 it was downgraded from Group One status to a Group Two race.

Since its inauguration, there have only been three horses which have managed to win the event more than once with River Rough in 1983-84, Planet Ruler in 1989-90 and Fontelina in 2012-13.