The Tea Rose Stakes is a race for 3YO fillies held in September at Randwick on George Main Stakes Day as a lead-up into the Group 1 Flight Stakes (1600m). 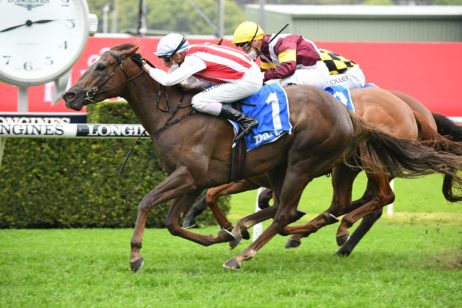 The Tea Rose Stakes is a Group 2 race held mid-way through the Sydney Spring Racing Carnival in September.

Quality fillies that run well in the Tea Rose Stakes usually progress on to the premier fillies’ event at the carnival, the Group 1 Flight Stakes (1600m) at Randwick on Epsom Handicap Day a fortnight later.

The latest edition of the Tea Rose Stakes 2021 ran on Saturday September 18, 2021 and was won by the John Sargent-trained Four Moves Ahead.

Dual Group 1 fourth placed Four Moves Ahead ($4.80) returned to winning form with a gun ride by jockey Nash Rawiller to get her first home in the 2021 Tea Rose Stakes results. The minor placings were reversed after a successful protest by jockey Jason Collett whose mount Mallory was promoted to second over Swift Witness.

The Tea Rose Stakes betting odds for 2021 will be available below with market links to Ladbrokes.com.au for punters to back their favourite spring fillies at the right price the week of the race.

The official Tea Rose Stakes 2021 Final Field of Flight Stakes hopefuls will be published in full below once released by Racing NSW on the Wednesday of race week.

The Princess Series’ continues with a class line-up of fillies doing battle in the 2021 Tea Rose Stakes field this Saturday, markets led by Four Moves Ahead and She’s All Class both looking to return to their better form.

Nominations for the Tea Rose Stakes close the Monday leading-up to George Main Stakes Day and will be published for punters below as soon as released.